Pulses to attack weeds on many fronts

Evidence is mounting that shows pulses can play an important part in weed control, particularly in the war against herbicide resistant annual ryegrass. In the past, pulses have often been named as ‘the weak link’ in crop rotations when it comes to weed control however recent research indicates that pulses can make a valuable contribution to an integrated weed management program.

“Field pea is a particularly useful crop for growers to launch a strategic multi-pronged attack on grass weeds,” says former NSW DPI researcher, Dr Eric Armstrong. “The idea is to apply a double knockdown prior to sowing, use pre- and post-emergent herbicides, crop top in spring and harvest early to stop weed seed set.” 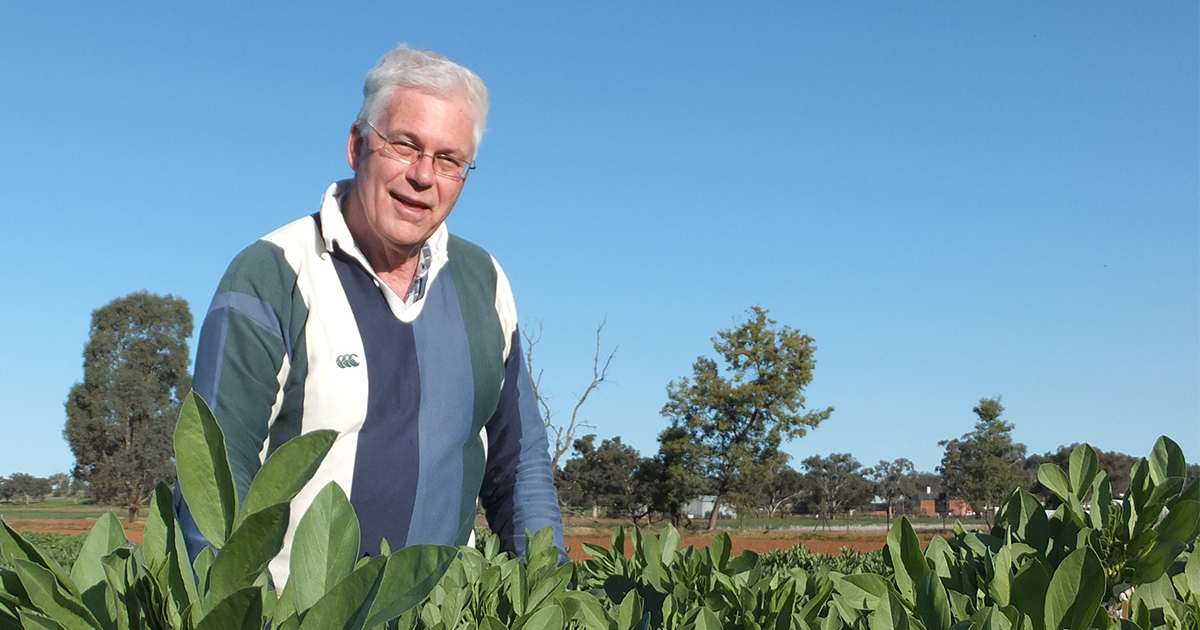 Dr Eric Armstrong says that when crop topping, timing is critical to prevent seed set of the target weeds. For crop topping to be effective, spray the paddock before the weed seeds are viable.

“Hitting weeds before, during and at the end of the pulse crop phase with different herbicide and cultural tools has a big impact on weed numbers and largely eliminates the addition of weed seed to the soil bank. Not many other crops allow this many tactics to be applied to weeds in one season,” he says.

Leader of the NSW DPI Pulse team, Mr Mark Richards says the early flowering and maturing field pea varieties PBA Pearl and PBA Oura are the best candidates for crop topping, even though they were not released with this management strategy in mind. These earlier maturing varieties of field pea provide better weed control options than Kaspa field pea, chickpea and lupin, all of which generally mature later, sometimes after the target weeds have set seed.

“As early maturing varieties of faba bean, lentil and lupin become available, their adoption in crop rotations for weed control alone will be justified, especially given the broad spectrum of herbicides registered for use in pulse crops,” he says.

Dr Armstrong recommends growers give greater consideration to the value of pulse crops in the rotation to achieve agronomic stability and improved profitability. “If weeds are a priority, growers can include a pulse crop with the intention of crop topping to prevent weed seed set—accepting a small yield penalty in return for bringing the weeds under control,” he says. “Brown manuring the pulse crop is a last option and would only be chosen in very high weed burden situations.”

“When crop topping, timing is critical to prevent seed set of the target weeds,” says Dr Armstrong. “The weed seeds must be at or before the milky dough stage for crop topping to be an effective weed control measure.”

If brown manuring is chosen, end the crop when the weeds are flowering and before the weed seeds reach the milky dough stage to be sure of 100 per cent seed set control.

If herbicide resistant weeds are the main priority, spray out the paddock before the weed seeds reach milky dough stage.

Some of the decisions surrounding the use of manuring and crop topping can occur during the growing season as seasonal conditions dictate. However, Dr Armstrong recommends growers give careful consideration to the use of pulses when they are planning their crop sequence several years in advance.

“When choosing a pulse crop, consider the species’ adaptation to the farm and whether it is suited to crop topping and or desiccation as part of an integrated weed control program,” he says.

From an economic point of view, it is important to calculate returns over the whole crop sequence rather than for each crop on its own as this will take into account any benefits or savings in soil moisture, soil nitrogen or pest and disease management.

“Although there are significant soil health benefits in green or brown manuring a pulse crop it is rarely economical across the crop rotation,” Mr Richards says. “This is because growing two cash crops and a manure crop, or fallow, rarely earns as much income as three consecutive cash crops, even though the crop grown following a manure crop is likely to produce higher yield.”

A 5-year study led by Tony Swan, Senior Experimental Scientist, CSIRO Agriculture clearly identified that a two-year break from cereal production and the implementation of all available weed seed control options is the best way to run down the ryegrass seedbank.

Where herbicide resistant annual ryegrass is a major problem, an alternate three-year sequence of wheat-hay (sprayed afterwards) in year one, pulse-grain (spray topped) in year two, and Roundup Ready (RR) canola in year three can be profitable and also reduce the seed bank to extremely low levels.

Mr Mark Richards leads the New South Wales Department of Primary Industries (NSW DPI) Pulse team at Wagga Wagga that was previously led by senior research agronomist, Dr Eric Armstrong. Both researchers have worked with pulses for many years and are passionate about the options pulse crops can provide the farming system.

The on-going research investment by NSW DPI and the Grains Research and Development Corporation (GRDC) continues to examine weed control options and management in pulse crops.