Putting herbicides to the test

Relying on herbicide resistance test results from a neighbour or neighbouring paddock can be a waste of time, according to weed testing specialist, Dr Peter Boutsalis.

“Every paddock is different and testing each paddock for herbicide resistance gives growers a baseline to know whether a particularly herbicide will work – before the investment is made,” Dr Boutsalis says. “Guessing or ‘borrowing’ a resistance profile from another paddock can be inaccurate.” 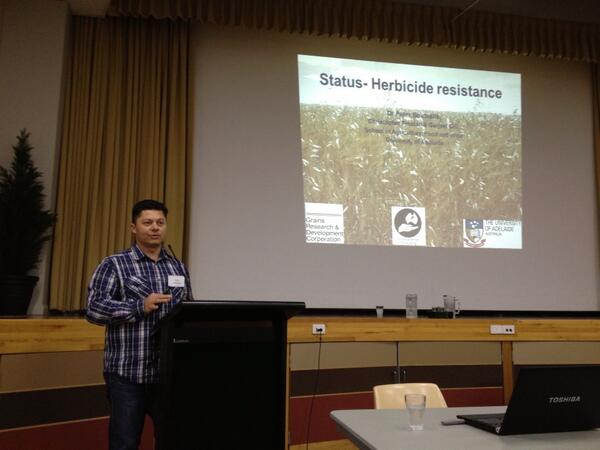 Dr Boutsalis is a GRDC funded researcher with the University of Adelaide in weed control and also operates Plant Science Consulting, which provides a commercial plant and seed testing service for growers Australia-wide.

“One of the most important times to test is during the growing season,” Dr Boutsalis says.

“The weed plant test is called a QuickTest and it involves removing 50 to 100 plants from the field, packaging and dispatching to our Adelaide site.

“This can be done before or after herbicide application but the plants need to remain almost dry during transport to avoid rotting.

“If the soil has been washed off, the plants need to be blotted dry and placed in a waterproof, sealed plastic bag (eg. Ziplock bag) and sent via Express Post. More importantly, leaves must not be wet”

Once the package is received, the plants are trimmed and potted until new growth occurs.

“Within a week we get new leaves emerging, it is a young plant again. Once that happens we spray them in an accurate spray cabinet according to the herbicides the grower wishes to test,” he says.

All grasses can be tested effectively, along with young broadleaf weeds including wild radish and mustards.

Dr Boutsalis says the advantage of the QuickTest compared to seed testing is that it saves several months, rather than waiting for results from seed testing.

The main plants being sent in from the southern grains area include ryegrass, brome grass, wild oats, barley grass, phalaris and some broadleaf weeds including wild radish.

“The beauty of the QuickTest is that if the plants are still green and in the vegetative stage you can test for resistance – even if they’ve multi-tillered.,” Dr Boutsalis says.

“For grass weeds, the QuickTest takes four weeks from the time the plants are received until the results are conveyed to the farmer. Broadleaf species require more time”

“You know you are testing the actual weeds that have caused the problem in the paddock at that time.”

Testing seed gives growers another opportunity in determining the resistance profile of their properties and southern region growers send seed to Plant Science Consulting between October to January for testing.

Samples are cleaned and dried but the hurdle is dormancy until March-April.

“We have a dilemma in that the seed is dormant during summer but the farmers want their results so they can make decisions for the next growing season,” Dr Boutsalis says

“We have to try to break dormancy and ‘convince’ the seeds to germinate by using various chemicals or manipulating light and temperature. Each species has different conditions required to break dormancy.”

Packaging seed for dispatch is best done in two layers of paper bags and sent via Express Post.

“This is important, particularly in the early part of the season when the seeds are still actively respiring and can rot if placed in plastic bags.”

For more information on testing services, visit www.plantscienceconsulting.com.au or www.csu.edu.au.