The Australian cotton industry has benefited enormously through widespread adoption of Roundup Ready technology, with close to 100 per cent adoption since 2010/11.

A downside of the uptake of this technology has been the shift in the weed spectrum found in cotton fields. Department of Agriculture and Fisheries (DAF) researcher Dr Jeff Werth says growers have achieved better control of Cyperus sp. (nutgrass and other sedges), but surface germinating and glyphosate tolerant species, along with reduced control of vines and legumes have found the new cropping system favourable. 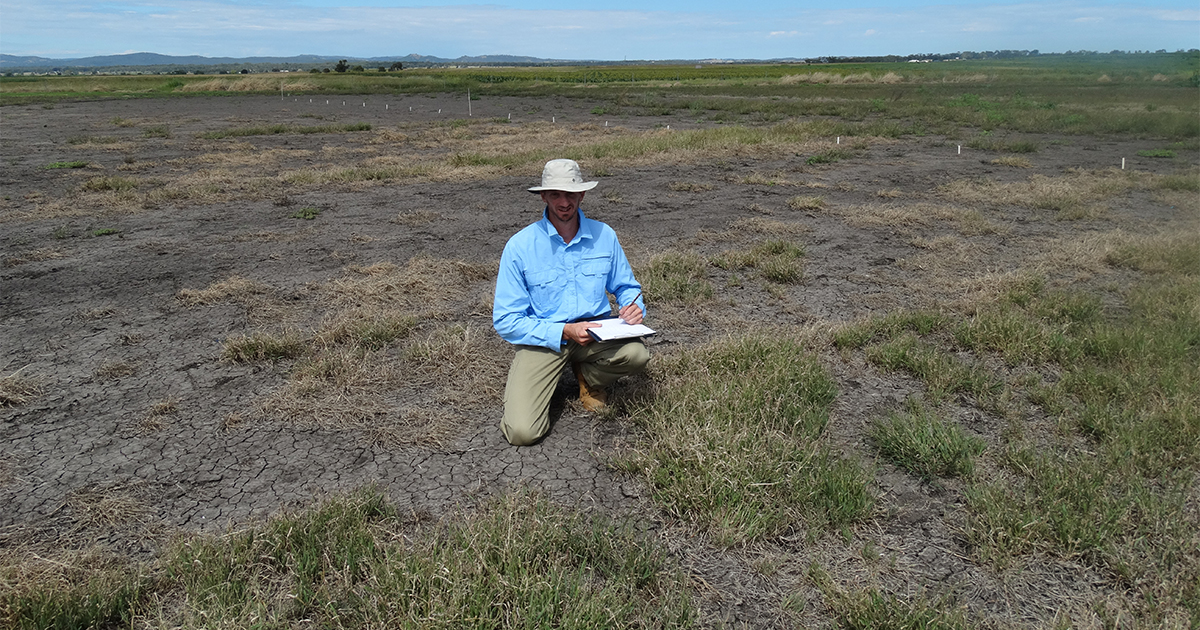 Jeff Werth (DAF) collecting data at the patch eradication trial at Hermitage Research Facility, Warwick. The dense patches of awnless barnyard grass seen in this image are the glyphosate-only treatments.

“This shift has taken years to occur and now we are seeing weedy patches establishing in cotton crops,” he said. “We have used crop modelling to show that managing these patches is effective in awnless barnyard grass and now we have field experimental results demonstrating that the industry’s best management practice weed control strategy works.”

The treatments applied were designed to compare ‘glyphosate only’ with the ‘2+2&0 strategy’ to see the effect on ABG emergence and seed bank. They also tested a few ‘eradication’ tactics, which were applied at three different times in the cropping season – 1. Early (Oct to mid-Dec), 2. Mid (mid-Dec to mid-Feb) and 3. Late (mid-Feb to March). The experiment ran for a four-year cotton-fallow-fallow-cotton rotation.

“When glyphosate was used without applying any other weed control tactics, weed emergences were almost always higher than where multiple tactics were used,” said Jeff. “The most consistent tactic for reducing barnyard grass emergences was metolachlor applied six weeks prior to planting in the ‘Eradication phase 1’ treatments.”

Pendimethalin applied at planting seemed to have little effect on the major flush of weed germination that usually occurs in spring, but did have some effect on later germinations.

“Including residual herbicides in the weed control program can really reduce the number of weeds that emerge, and as a result, there is less pressure on post-emergence herbicides applied later in the crop,” he said.

This simulation experiment also demonstrated that the 2+2&0 strategy was effective in driving down the weed seed bank, which is the ultimate goal of any integrated weed management program.

Jeff said that it took three years to really see the differences between the two main treatments, so persistence is required if you don’t see immediate changes in weed numbers. Eradication treatments applied early in the crop season were also the most effective in driving down the weed seed bank.

Table 2.  Total Awnless barnyard grass emergence in each year of the experiment.  Means with the same letters are not significantly different.

The time taken to see a decline in weed populations is related to the longevity of the seed of different weed species. In a cotton farming system small seeded species such as feathertop Rhodes grass, windmill grass, fleabane and sowthistle generally last in the soil for 2–3 years; larger seeded species such as awnless barnyard grass and liverseed grass last about 4–6 years and harder seeded species like bladder ketmia and peachvine last 6–10 years.

“It is reasonable to expect that the longer the 2+2&0 strategy is applied, along with early season eradication tactics, the greater the difference there would be compared to a glyphosate-only approach,” he said. “In years with multiple rainfall events across the summer, there would be increased benefit from employing early eradication tactics to avoid a potential build-up of the weed population. It is critical to ensure that survivors are controlled to prevent potentially resistant seed re-entering the soil.”

The 2+2&0 strategy forms the basis of the Cotton Herbicide Resistance Management Strategy and is best applied in all cases to minimise the risks of resistance development. If a problem is detected early, the 2+2&0 can form the baseline response, and extra tactics can be incorporated to limit potential spread of the patch in the field, and drive down the seed bank.