Remove the fetters from crops and they’ll trample the weeds

Weeds can exploit situations where crops fail to germinate or grow less vigorously. This does not usually mean that the weeds prefer soils that have constraints such as acidity, compaction or low nutrition status.

While crop responses to changes in soil pH are extensively researched, there is far less research available that quantifies the impact of the amelioration of soil acidity on weed growth. 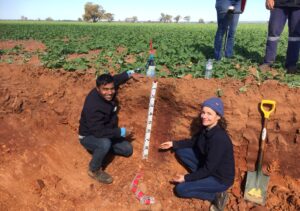 Most crops and pastures grow best in soils with a pH between 5.5 and 8, but some crops, such as barley, are more sensitive to soil pH than others. Similarly, some weeds are able to grow in hostile environments but will often grow better when the pH is in the optimal range for crop growth. For example, annual ryegrass competes very strongly with wheat in low pH soils, but actually grows best in the same pH range as crops. On the other hand, there is some evidence that wild radish prefers acidic soils.

Identifying soil constraints can involve detailed investigations and there are commonly multiple constraints at play. With approximately half of the agricultural soils in Australia having a surface pH of 5.5 or less, this constraint alone can be responsible for significant yield loss. Conversely, South Australian farmers are more likely to have to contend with high pH soil constraints, with 60 per cent of agricultural soils in that state being highly alkaline.

These experiments were conducted at field sites in the Merredin and Wongan Hills shires in Western Australia. The scope of this research included two experiments:

Crop rotation and lime at Merredin

Incorporation of lime had no significant effect on wheat yield or ryegrass biomass, even though incorporation increased pH at depth (10–15 cm) from 4.2 to 5.1.

A wheat-fallow rotation reduced ryegrass density, biomass and seed production and increased yield compared to the continuous wheat system. Lime rate and incorporation within the wheat-fallow system increased soil pH (0–5 cm) from 4.9 to 5.8, but had no effect on ryegrass due to uniformly low weed pressure. Fallowing is a very effective weed control measure, but is unlikely to be a profitable option unless weed pressure is very high. 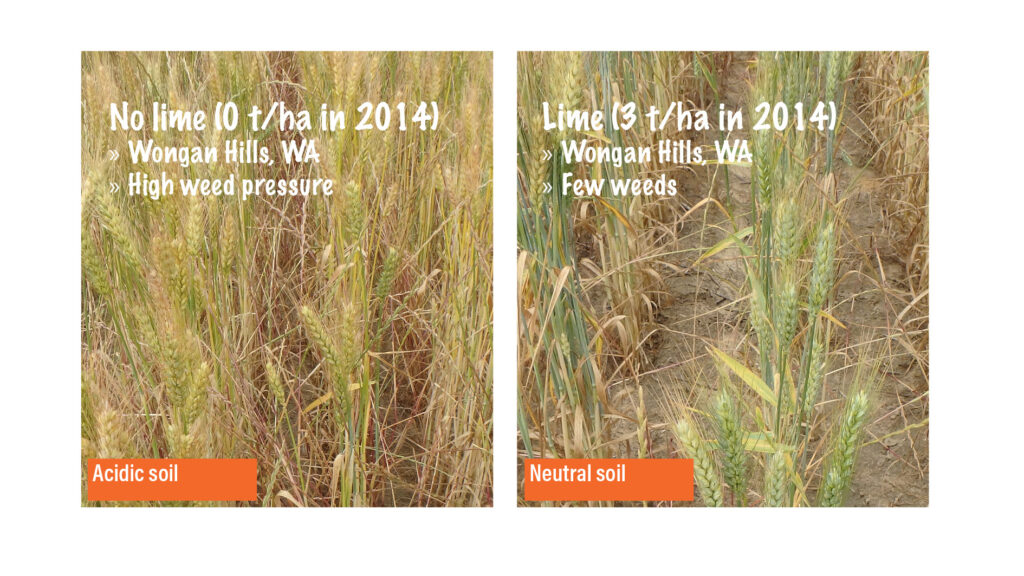 Wheat density was not affected by lime, but tiller number increased with increasing rates of lime applied in 1994 and 2014. The slight increase to wheat yield following application of lime was not significant and incorporation of lime in 2018 did not affect ryegrass or wheat production.

Deep tillage increased pH at depth (20–30 cm) from 4.2 to 5.2. The interaction between lime application in 2014 and incorporation of lime in 2018 was significant for ryegrass, with weed density, biomass and seed production decreasing with increasing depth of tillage in those plots where lime was not applied in 2014 (0 t/ha treatment). Deep tillage did not significantly affect ryegrass in plots where 3 t/ha of lime was applied in 2014, as ryegrass density was already very low across all tillage treatments. By 2018, the lime applied in 2014 had already done the heavy lifting in terms of reducing weed pressure in the 3 t/ha plots. 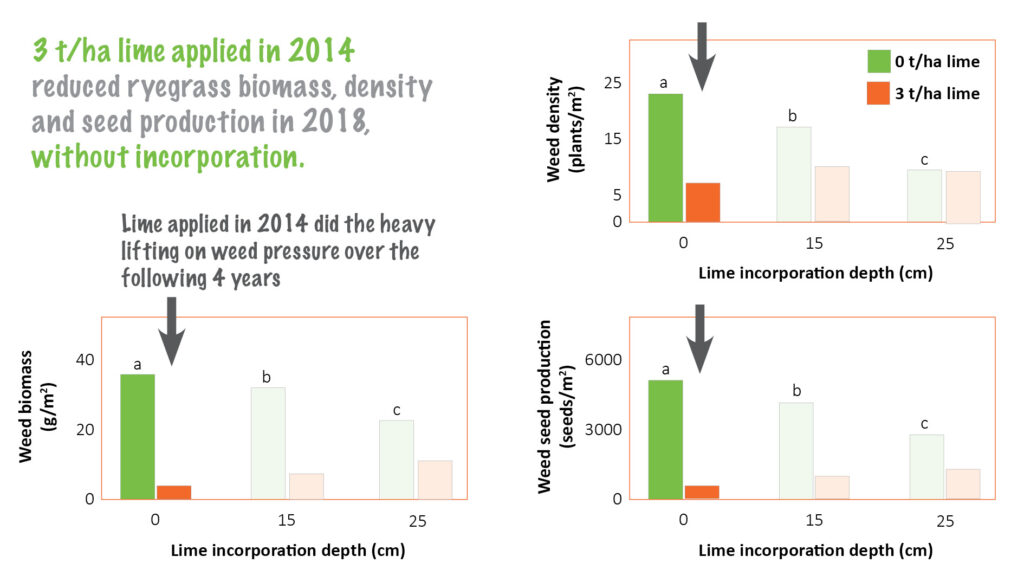 Applying and incorporating lime is the best way to increase the pH of acidic soils, but it usually takes several years before a surface lime application has a measurable effect on soil pH at depth. Incorporation is the best way to speed up the process and also releases other soil nutrients to boost crop growth.

By default, the incorporation of lime by tillage or inversion also buries weed seed, placing at least a portion of the seed bank deeper in the soil profile and prohibiting germination. Annual ryegrass seed has optimal emergence from a depth of 1 or 2 cm. Emergence reduces with increasing depth and ryegrass does not emerge from depths of 10 cm or more. Even when buried, some seed can remain viable and emerge if the next sowing operation brings the seed back near the soil surface.

This trial work confirms the importance of crop competition in a diverse weed control program. Addressing soil constraints, such as low pH (and the associated aluminium toxicity), enables the crop to compete strongly with weeds such as annual ryegrass – reducing weed growth and seed production. 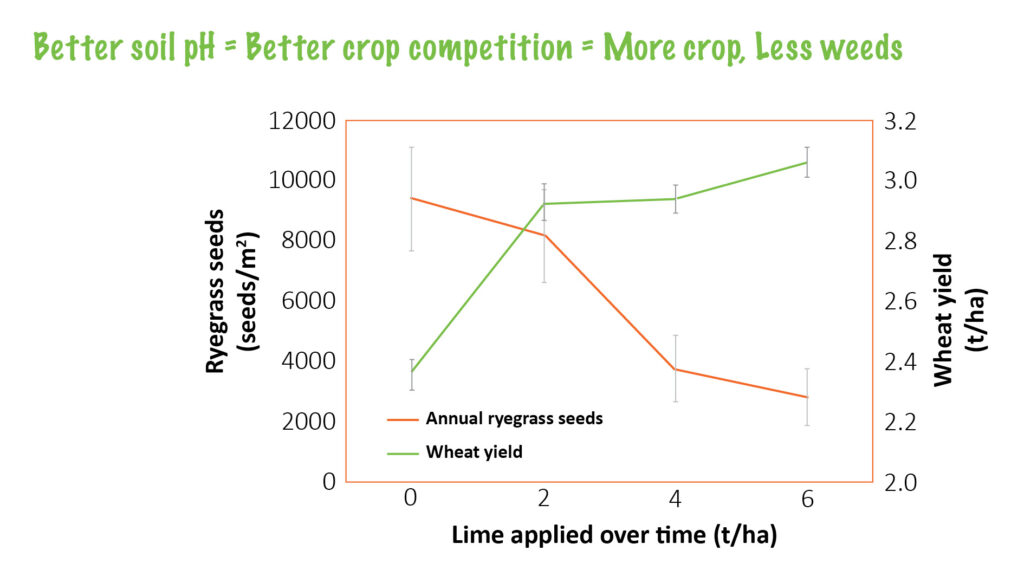 This research was conducted by researchers from the Department of Primary Industries and Regional Development, Western Australia and was supported by the Grains Research and Development Corporation, a WeedSmart financial partner, through the Soil Constraints Initiative—Innovative Approaches to Managing Subsoil Acidity (DAW00252) project.

Addressing soil constraints, such as low pH (and the associated aluminium toxicity), enables the crop to compete strongly with weeds....

Addressing soil constraints, such as low pH (and the associated aluminium toxicity), enables the crop to compete strongly with weeds....