Narrow windrow burning to destroy weed seed has been widely accepted as a useful tool, however there are risks and it can be time-consuming.

Robert Gollasch has been burning narrow windrows for a few years now and has found ways to minimise the time commitment while still gaining the benefits in his weed control program.

Robert and Liz run a mixed farming operation at Wallacetown, north of Wagga Wagga, NSW. For the last 40 years they have continuously cropped most of their 2000 ha farm and currently run 1100 first cross ewes.

In the early 2000s the Gollaschs noticed increased weed burden across their cropping area and that herbicide resistance was reducing their control options. In response, Robert reassessed his cropping system and introduced more diversity in the crops grown and the weed management tools used.

“Implementing narrow windrow burning was not difficult but it did take a couple of years for us to really refine the practice on our farm,” said Robert. “Preparing for narrow windrow burning is fairly simple – the chute only takes a few hours to make and fit – and then it is down to cutting the crop short so that everything goes through the header. Although cutting short can be difficult in canola we have found that it is worth persevering with.”

Robert designed and built a chute for his Claas harvester and uses a custom-made trailer to safely and easily remove the spinners. The chute is fitted with small trolley wheels so it can be maneuvered into place and only lifted a short distance. The opening of the chute is 500 mm wide, which creates a suitable windrow without causing blockages in the header. 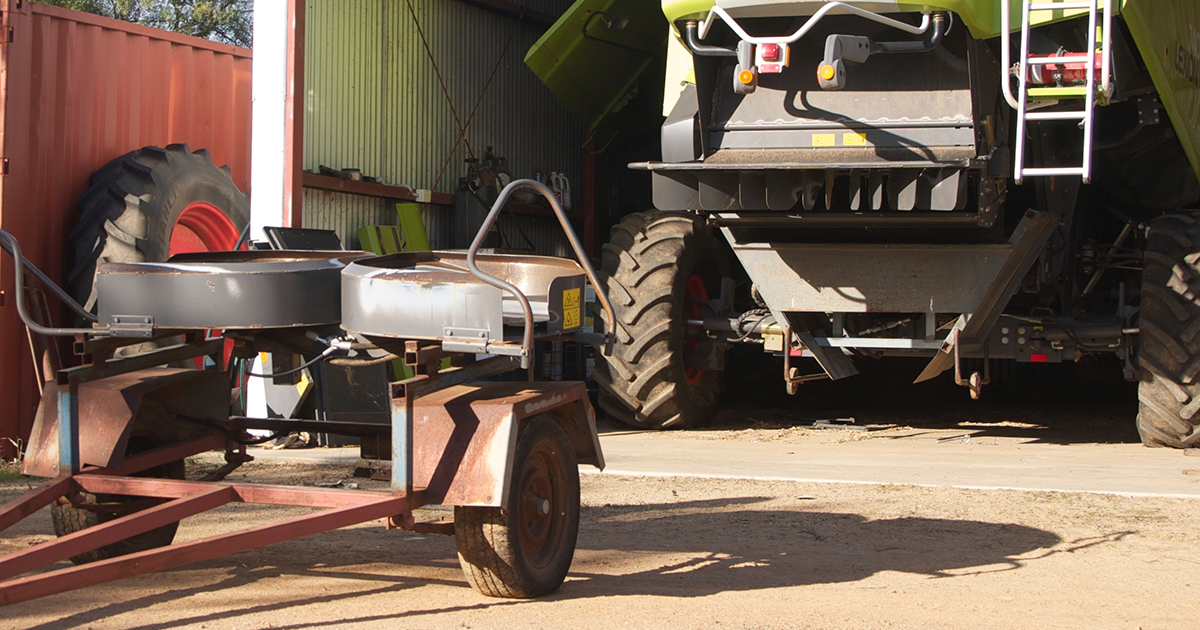 Simple innovations such as trolley wheels on the narrow windrowing chute and a customised trailer for the spinners off the harvester makes it easier to swap and go between crops at harvest.

“We use a low stocking rate on the crop stubble and the sheep just pick over the windrows looking for grain,” he said. “We don’t see any measurable benefits from sheep grazing the windrows but they don’t seem to spread the seed and it is making use of a resource on the farm.”

If overgrazed, sheep can create many small fire breaks in windrows. making them difficult to burn so it is important to monitor closely and remove sheep from the paddock before this occurs.

It is important not to leave the windrows sitting in the paddock for too long. Robert has found that an inch or two of rain on the windrows in autumn can make them very difficult to burn. He tries to burn the windrows as soon as permits are available in autumn and conditions are safe.

“One thing we have learned is that narrow windrow burning is most effective when you tackle a smaller area and do it well, rather than trying to windrow and burn every crop, every year,” he said. “If weed numbers are increasing in a paddock we will usually try to narrow windrow burn in that paddock for two or three years in a row to really drive down the weed seed bank.”

Robert aims to narrow windrow burn about 200–300 ha a year, usually in lupin and canola crops and finds two successive years of windrow burning in a paddock is very effective in driving down weed numbers.

Robert usually windrow burns about 200–300 ha each year, primarily in the canola or lupin phase of the rotation. To burn the windrows safely and effectively, he usually starts lighting the rows at midday and aims to have the job complete by 5 pm that day. Lighting the rows every 100 m or so produces a slow hot burn that is known to kill 99 per cent of annual ryegrass seeds present. Using a motorbike and burner, Robert lights windrows across about 50 ha a day, which takes only a few hours to burn out. He also takes into account the fact that narrow windrows in canola tend to burn slower than those following cereals and lupins.

The usual rotation Robert uses is TT canola, wheat, albus lupins, wheat and barley, then in older paddocks he establishes a lucerne pasture for five years for the sheep. The Border Leicester x Merino first cross ewes are crossed with Dorset rams and all progeny are sold.

Robert finds that ryegrass numbers tend to build up the most in cereal crops so in years where the weed numbers have increased he often bales the cereal crop rather than harvesting the grain. “Two successive years of windrow burning in the canola and lupins and then hay baling cereal crops is a very effective way to run down weed numbers,” he said.

Robert has implemented most tactics recommended in the Weedsmart 10 Point Plan to maximise the pressure on weed numbers across his farm and cropping rotation.

The barley is usually followed with a lucerne pasture phase and when Robert brings a paddock back into cropping he usually starts with canola to enable more grass weed control options followed with narrow windrow burning before planting cereals.

“We have used broadleaf cropping in our rotation for a long time, which has enabled the use of different herbicide chemistry, including pre-emergent herbicides, particularly in the lupins,” he said. “Our time with chemicals is running out so anything we can do to lessen our reliance will lengthen our use of chemicals and make our system more sustainable. We are relying heavily on clethodim for ryegrass control at the moment so being able to use Factor on lupins gives us some extra diversity in our herbicide program.”

“The sheep keep the pasture short and reduce grass seed set. Each spring I spray for barley grass then ryegrass control begins in earnest in the last few years of the pasture phase,” he said. “Paraquat and simazine are applied in the second last year of the pasture to treat annual ryegrass and silver grass and then a glyphosate and paraquat double knock is used to kill the pasture in preparation for a return to cropping.”

Robert and Liz Gollasch make the most of grazing livestock for weed control after harvest and during the pasture phase on their mixed farming operation near Wallacetown, NSW.

Robert has also reduced the crop row spacing from 12 inch to 10 inch to improve yields across the farm and apply more pressure to emerging weeds. Their Bourgault Paralink seeder with hydraulic tynes works well at 10 inch row spacing but relies on the stubble either being cut shorter or burnt as inter-row sowing is harder to achieve with 10 inch row spacing. A move to narrower rows and full stubble retention would require changing to a disc seeder.

The combination of increased crop competition and harvest weed seed control go hand in hand. In competitive crops, weed seed set is reduced and weeds that do set seed tend to have seed heads held high in the canopy where they are easier to capture at harvest.

Simple innovations such as trolley wheels on the narrow windrowing chute and a customised trailer for the spinners off the harvester makes it easier to swap and go between crops at harvest.

Narrow windrow burning to destroy weed seed has been widely accepted as a useful tool, however there are risks and it can be time-consuming....

Narrow windrow burning to destroy weed seed has been widely accepted as a useful tool, however there are risks and it can be time-consuming....