Having ‘eyes in the sky’ checking crops every ten days is a useful tool for growers and agronomists monitoring crops and managing weeds. Satellite images provide a very objective means of identifying weedy areas and measuring the response to management tactics. 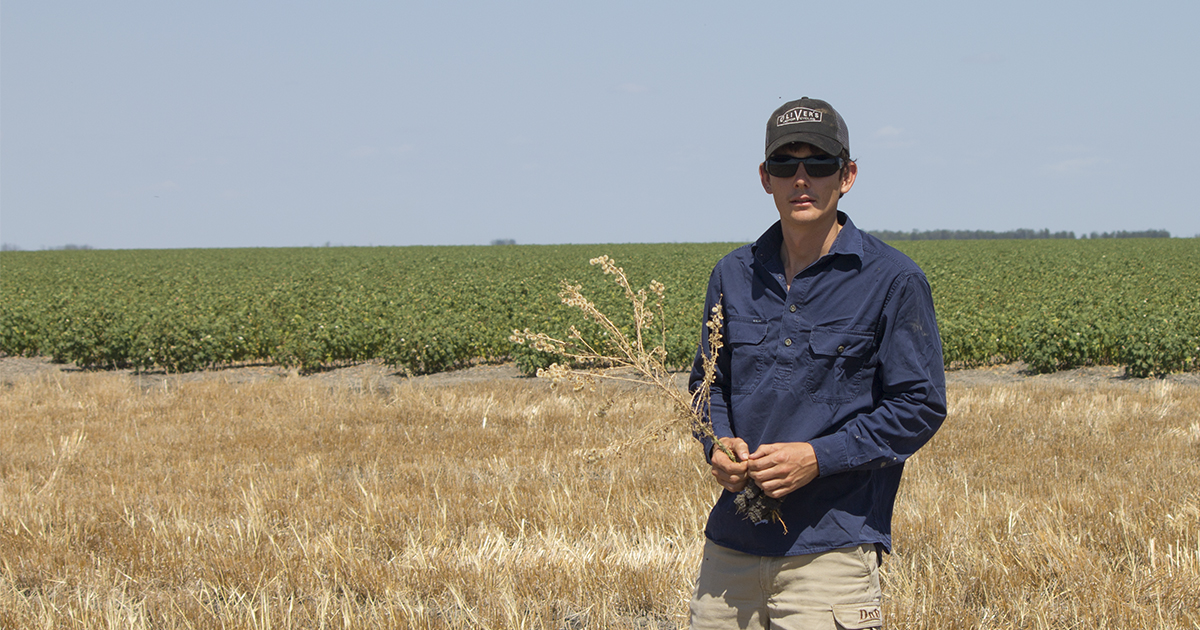 “Using the satellite images agronomists can look for anomalies in biomass production on their clients’ farms and can then go directly to the area on the farm to identify the problem,” says Ben. “In the case of weeds, it is easy to calculate the size of weedy patches and to monitor the impact of herbicide or cultural practices.”

“An example on our own farm was to clearly see the impact when we sprayed a paddock where awnless barnyard grass was a problem and were not able to get back with the second knock due to rain,” he says. “The recovery and spread of what we now know for sure was glyphosate resistant barnyard grass showed very clearly in the satellite images taken before and after the event.”

Glyphosate-resistant awnless barnyard grass is one of the Boughton’s main challenges, with a patch visible on satellite imagery following a fallow double knock where the second knock application was prevented.

Agronomists use the Satamap service to observe trends across their district and to make their farm visits more time efficient. In fallow paddocks the satellite images show the extent of vegetation (weed) growth that can be hard to see amongst tall stubble. The images show an average reflectance over 10 m by 10 m area so a similar sized patch on the map may represent a number of large individual plants spread out across the area, or a carpet of grass. That is the reason why ‘boots on the ground’ are still required to investigate exactly what species are present and to plan appropriate management.

“The satellite images are not a diagnostic tool on their own but they do provide valuable information for the grower and their advisor,” he says. “Some agronomists are even using imagery from the previous year to plan variable rate application of pre-emergent herbicide to treat areas where the weed seed bank could be expected to be high in paddocks with known problems.”

The use of satellite imagery links well with UAV (unmanned aerial vehicles, aka drones) to assist with the ground-truthing process across a farm.

The Boughtons property, north-east of Moree, NSW is predominantly winter cropping with up to 25 per cent summer cropping if the season permits. Ben says summer cropping is a great way to help clean up black oats coming out of winter cereals.

The farm is 100 per cent dryland cropping with no internal fencing and all paddocks set up in a 3 m controlled traffic configuration. Ben has found the tramlines can present a weed control challenge with black oats and phalaris taking advantage of the lack of crop competition.

The crop rotation is generally wheat, barley, chickpea to give a two year break for the chickpeas and avoid planting wheat on wheat.

“We aim for good, even crop establishment to generate strong crop competition early in the season,” he says. “This is even more important in paddocks where we dry sow and can’t do a pre-sowing knockdown on black oats.”

With Group A-resistant black oats on the increase Ben uses crop competition in barley to support a one-off use of Group A (Axial) and switches to Group B (Atlantis) in wheat. Ben is conscious of the risk of losing Group A efficacy altogether and is looking for alternatives to use in the barley.

“Sorghum is a good crop to combat Group A-resistant black oats using a glyphosate spray at the end of the winter fallow and planting in September,” he says. “Chickpea is also providing a useful crop for black oats control using Verdict and Select, both Group A, with high rates of oil and ammonium sulphate.”

Ben is using pre-emergent products such as Flame in the summer fallow but is very conscious of the impact these applications can have on crop rotation choices, particularly in years where the summer rainfall is limited.

“It is important to have a rotation plan worked out so you can take advantage of summer cropping opportunities and Flame can even cause crop damage in barley the following winter if there has not been enough summer rain,” he says.

Fleabane is another challenging weed to manage due to its natural tolerance of glyphosate and the need to be very careful with applications of Group I products, such as picloram in fallows, adjacent to neighboring cotton crops. Ben says Tordon 242 applied early in wheat crops to treat late germinating fleabane is providing very effective control with some residual activity.