Now is the time to take pre-emptive action to reduce the incidence of herbicide resistance in weeds, particularly in rotations that include herbicide-tolerant crops such as glyphosate-tolerant cotton.

“We know that it takes between 14 and 19 years of routine use of glyphosate to evolve resistance,” he says. “We have now had Roundup Ready cotton for 20 years, and there are many instances of glyphosate-resistant populations of weeds such as fleabane, windmill grass and barnyard grass, all of which flourish in reduced tillage farming systems.”

“With Bayer’s XtendFlex™ cotton technology with tolerance to glyphosate, dicamba and glufosinate in cotton potentially being available to Australian growers in the near future, the triple-stack of herbicide tolerance is already compromised where the target weeds are already glyphosate-resistant.”

To date, the problem is greatest in dryland cotton farming systems but is also quite prevalent in non-crop areas of irrigated farms, such as along irrigation channel banks.

Modelling suggests that using the three over-the-top herbicides in triple-stacked cotton crops will lead to a failure of the technology to control awnless barnyard grass within ten years. This is because of the already widespread incidence of glyphosate resistance in this species and the fact that glufosinate is only marginally effective on this species, and dicamba is not effective at all.

“When planning an integrated weed management program, the Cotton RDC recommends including two non-glyphosate tactics in-crop, two non-glyphosate tactics in the fallow and ensuring zero survivors,” says Eric. “Herbicide tolerance technology has been of great benefit to the cotton industry and has a fit in other farming systems too, but it can not stand alone. It must be supported and protected through adherence to the relevant stewardship program and a diverse weed management plan across the crop rotation.”

To preserve herbicide efficacy, it is necessary to reduce the total number of applications of each herbicide across the crop rotation and increase the diversity in weed control tactics. This is where residual herbicides can play a part, along with non-herbicide tactics, such as strategic tillage in summer and winter crops and in fallow situations.

A survey of cotton growers in 2021 indicated that 36 per cent of respondents were using three or more non-glyphosate tactics in their cotton phase – a 3-fold increase since 2015.

The main strategies that have increased since 2015 are pre-plant residual, residuals applied when planting cotton, in-crop cultivation before canopy closure and using an optical sprayer in fallow, often to target glyphosate-resistant weeds with residual herbicides.

Bringing residuals back into the herbicide program in the cotton phase requires careful planning. Some older herbicides that have not been used for several years are still quite effective and could make a comeback to farming systems that have come to over-rely on glyphosate. New use patterns are being registered for various products to control weeds at different growth stages or in-crop germinations later in the season. Applying residual herbicides as a directed spray provides effective control of late germinating weeds before canopy closure, where crop competition takes over. Residual herbicides that require incorporation are best applied at sowing or incorporated by irrigation.

Some residual products have long plant-back periods and will reduce the grower’s options for the following season. When residual herbicides are applied in fallow using an optical sprayer, high rates are often applied to small areas or patches due to multiple nozzles firing and the herbicide overlapping.

“There were reports from growers of bare or poor growth patches seen in cotton crops after using residuals in fallow to target resistant weeds using residuals in fallow,” says Eric. “To help quantify the potential plant-back effect, Graham Charles at the Australian Cotton Research Institute conducted a field trial and evaluated several residual herbicide products and rates on cotton germination and seedling growth.”

The residual treatments were applied on 30 July, the cotton crop was planted on 7 October, and seedling damage was evaluated on 3 November. 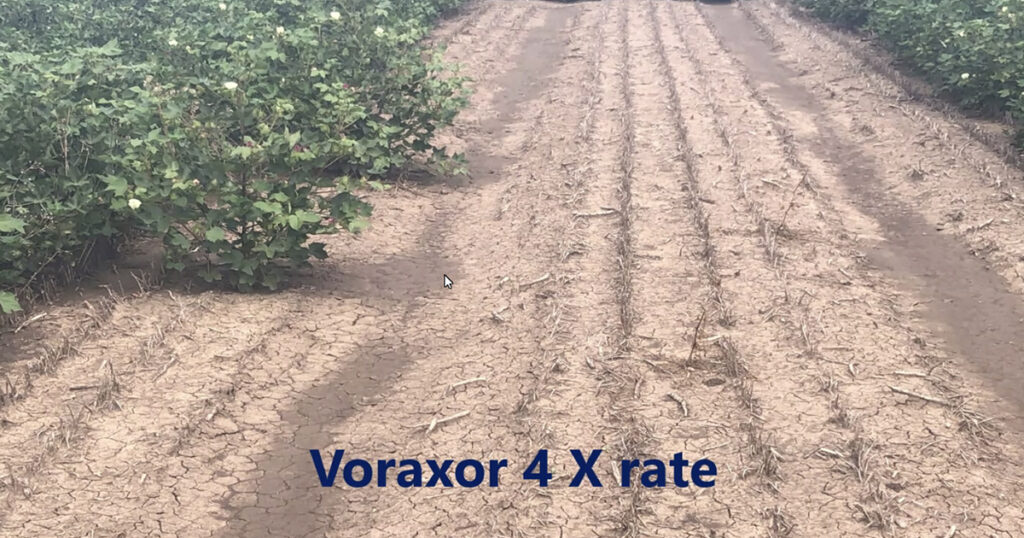 “This demonstrated that the risk of plant damage needs to be taken into account when choosing chemicals for optical sprayer application in fallow,” says Eric.

Actively looking for survivors after each control tactic must become a priority management practice on all farms. A few large plants that survive control tactics can generate masses of seeds that are very likely to carry some herbicide resistance. Physical removal of these plants before they set seed prevents their contribution to the seed bank for future germinations.

The WeedSmart Big 6 is an integrated weed management program that growers can apply across all cropping systems. A diverse approach that includes several chemical and non-chemical tactics places downward pressure on the weed seed bank and reduces herbicide resistance risk.