Globally, resistance to the world’s oldest herbicide is relatively rare. Unfortunately, one of the economically significant examples of auxin (2,4-D, dicamba and MCPA) resistance is in wild radish populations in Western Australia.

Roberto Busi, research fellow with the Australian Herbicide Resistance Initiative (AHRI), says the recent and future release of new crops with resistance to synthetic auxins (USA only) will heighten the risk unless stewardship measures are followed. 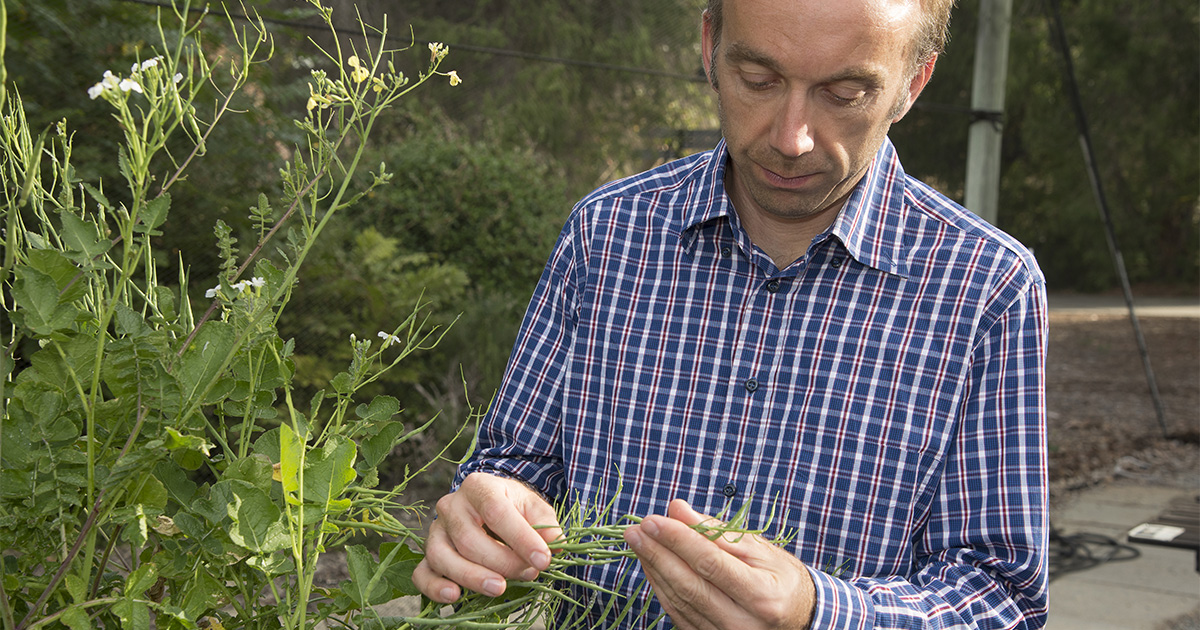 Dr Roberto Busi, AHRI research fellow says researchers around the world are working to better understand the way auxin herbicides work and the mechanisms plants use to evolve resistance.

“The synthetic auxin herbicides have been in wide-spread use since their discovery in the 1940s. According to a 2014 Dow AgroSciences report, herbicides such as 2,4-D and dicamba are used on about 200 million ha world-wide. They mimic the activity of natural plant hormones and seem to have multiple sites of action along with both physiological and biochemical effects that lead to impaired plant growth and death,” he says. “The rate of resistance evolution has been lower than other herbicide modes of action.”

“2,4-D resistant wild radish was first documented in Western Australia in 1999,” says Dr Busi. “Since then surveys have revealed some populations with high-level 2,4-D resistance and a total of 60 per cent of randomly surveyed samples in 2003 that has levelled out at around 74 per cent in both 2010 and 2015.”

Multiple resistance to at least two herbicides is quite common in wild radish populations in Western Australia, generally to chlorsulfuron and 2,4-D, however the last survey also showed alarming levels of resistance to diflufenican. However, resistance to atrazine, glyphosate or Group H herbicides remains rare or is not reported.

“Western Australian farmers have been able to find other ways to reduce the overall number of wild radish plants in their crops by running down the soil seed-bank and this is the correct way to overcome resistance,” says Dr Busi. “If auxin herbicide use were to increase or be used more frequently in Australian cropping rotations growers would need to implement non-herbicidal strategies that reduce the risk of herbicide resistance.”

Group I resistance has also been recorded in wild radish in South Australia, Victoria and New South Wales and in other species including Indian hedge mustard, sowthistle and capeweed.

Why did wild radish in WA evolve 2,4-D resistance when it is so rare globally?

Short answer: Wild radish in the northern WA wheatbelt infested paddocks at high density and the repeated use of Group B and 2,4-D rapidly selected for high levels of resistance.

Longer answer: Growers and agronomists are now well aware that simply swapping from one herbicide to another does not help manage herbicide resistance. This lesson was learnt the hard way in WA where 2,4-D initially provided excellent control of Group B-resistant wild radish. Failure ensued because 2,4-D was applied frequently to dense populations of wild radish, a species that is a prolific seeder and the seed can persist in the soil for many years. In two study populations we found that 2,4-D resistance was clearly inherited as a single, nuclear (pollen transmitted) dominant or near-dominant gene trait. This contributed to the speed of resistance evolution to 2,4-D in wild radish. In other species the traits conferring 2,4-D resistance may be less frequent or be less genetically dominant, and that slows the evolution of resistance.

Longer answer: True fitness penalty has not been established for 2,4-D resistant weeds. A ‘fitness penalty’ is when a resistant plant, growing in the absence of the herbicide is less fit than a susceptible plant.

AHRI research has demonstrated that when 2,4-D resistant plants are sprayed with 2,4-D they are suppressed, show strong symptoms of herbicide damage, but do not die. However, if these plants are sprayed when they are small and grow in competition with a crop, the resistant weeds may die or may produce far less seed than it would in a non-competitive situation.

Crop competition can therefore be used as a weapon against 2,4-D resistant weeds while continuing to use 2,4-D or MCPA as part of a tank mix.

The release of new auxin herbicide formulations in Australia means farmers have more options for broadleaf weed control but researchers emphasise the heightened need for stewardship to reduce the risk of resistance and the importance of crop competition in managing resistance.

How can tank mixes extend the use of herbicides that weeds are resistant to?

Short answer: Multiple resistance to auxin herbicides and other MOA is rare in individual plants. Focus on low seed-banks, use herbicide mixes and mix it up with non-herbicide strategies to keep ahead of resistance.

Longer answer: The most important objective is to aim for low weed numbers. In this situation, while a population of wild radish in a paddock may be resistant to a number of herbicide modes of action the chance of an individual plant being resistant to more than one MOA is very low. In plants such as wild radish that are cross-pollinated there is a lot of mixing of the genetic material so stacking of resistant traits is initially uncommon, particularly for resistance traits that are recessive. Consequently, if a tank mix of three compatible herbicides with different modes of action is applied, with each herbicide at robust label rates, an individual plant is highly likely to be susceptible to at least one of the herbicides applied and so overall plant numbers are reduced through the use of the tank mix.