Just five years ago Central Queensland grain farmer Andrew Bate was in a tractor, spraying a wheat crop, and thinking about ways to farm better and more efficiently. His idea to create a ‘swarm’ of small, lightweight machines that could work autonomously and cooperatively, is now a commercial reality. 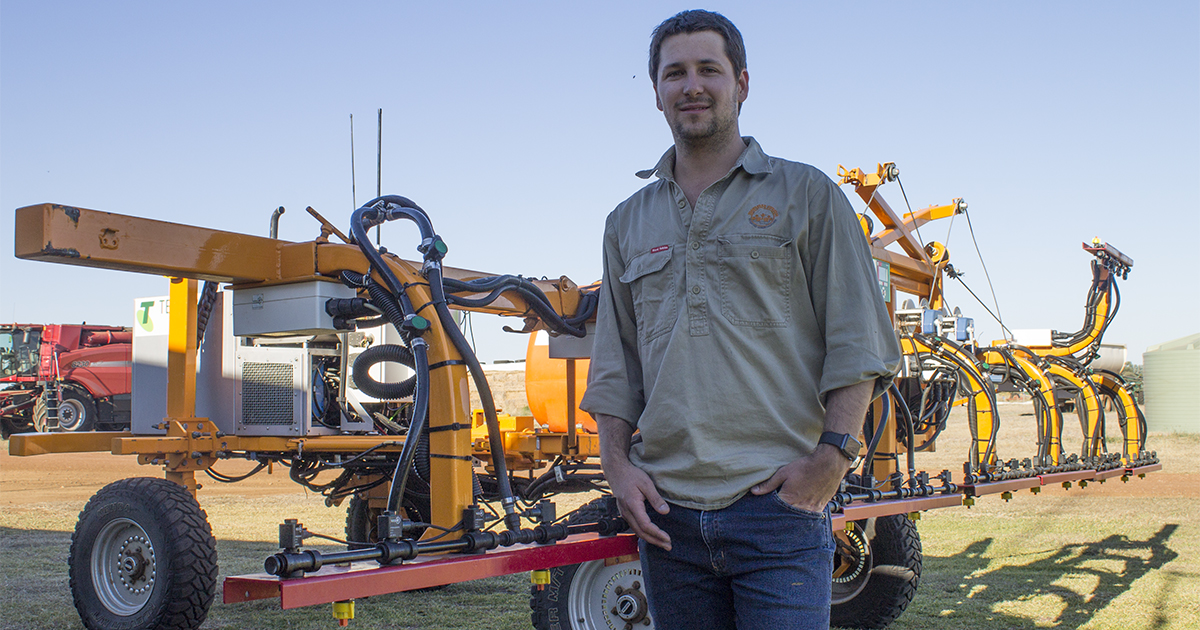 SwarmFarm operations manager and leader of field development, Will McCarthy, says the robots are the ultimate weed scouts, tracking down escapes and eliminating them before they have a chance to set seed.

Along with his wife Jocie, Andrew is founding director of SwarmFarm Robotics. The headquarters of their agricultural technology company is their farm ‘Bendee’ at Gindie, south of Emerald, where their team of seven software and mechatronics engineers and technicians is building and testing world-first robotic technology specifically for agricultural applications.

“There are currently seven SwarmFarm robots working on grain farms, turf farms and in an environmentally-sensitive area on a mine site,” says Andrew. “Our commercial release of 50 robots setup for spraying weeds using the WeedIT optical sprayer technology is now underway.”

Weed control provides an excellent opportunity for robotics to shine. A time-consuming but ‘simple’ task that robots can do very effectively at a slower pace, ensuring every weed in the paddock is accurately and effectively controlled while still at a small size.

Weighing just 2 t fully loaded, each robot is only 10 per cent of the weight of a conventional sprayer and they fit in perfectly with zero till and controlled traffic farming systems.

The cost benefit of robots applying herbicide lies in the frequency of treatment, accuracy and ability to safely operate any time of the day or night. While a grower may hesitate to go spraying, concerned that there might be another rain event and subsequent germination, the robots can ‘go now and go later’, always targeting small weeds at their most susceptible growth stage.

Weighing just 2 t fully loaded, each robot is only 10 per cent of the weight of a conventional sprayer and they fit in perfectly with zero till and controlled traffic farming systems.

The SwarmFarm robots optimise the use of existing optical sprayer technology to identify and target small weeds in a green-on-brown situation (i.e. in fallow) by enabling more frequent applications that are slower and more accurate. The ability to go over the same paddock every few weeks is the standout difference that robotics can bring to the management of herbicide resistance.

SwarmFarm operations manager and leader of field development, Will McCarthy, says the prescription spraying used on ‘Bendee’ involves the robots passing over the fallow paddocks once every two weeks. “This way, no weed will get bigger than the 50 cent piece size that is optimal for effective control,” he says. “We can apply a wider range of herbicide modes of action, more robust rates for chemicals registered for this use pattern and potentially reintroduce products and brews that may have had reduced efficacy as broadacre sprays in the past.”

“The robots are the ultimate weed scouts, tracking down escapes and eliminating them before they have a chance to set seed. Constantly targeting small weeds and preventing seed set is the only way to keep weed numbers low and avoid herbicide resistance.”

The SwarmFarm robots enable the optical sprayer technology to really come into its own because the robots can operate slower, the cameras and sprayers can be closer together and the robots can go over the paddock repeatedly so there is no concern about getting the timing right. Every weed can be treated at an early growth stage for the herbicide to have maximum effect, tackling herbicide resistance at the source by applying constant downward pressure on the weed seed bank.

The SwarmFarm concept is ideal for new technology developments, as it allows easy integration of third party products as they are being developed, such as green-on-green technology. Will says the robots would then be able to distinguish between a weed and a crop plant and even between weed species. This will allow the removal of volunteer crop plants and even target broadleaf weeds like sowthistle in a broadleaf crop such as chickpea.

“Using the robot concept, microwave technology becomes a realistic option because the robots can stop at every weed and apply the necessary microwave blast to kill each weed, something that is simply not feasible for a tractor operator,” says Will.

WeedIT cameras capture data from a 1 m wide band on the ground using NIR and IR light to detect green weeds in a ‘brown’ paddock. The SwarmFarm concept allows easy integration of third party products as they are being developed, such as green-on-green technology or non-herbicide tactics such as targeted tillage or robotic chipping, steam or any other tactic found to be effective.

“Aside from weed management, the robots will enable direct management of a crop’s plant population to maximise yield potential for the available soil moisture,” he says. “There is no reason why the SwarmFarm platform can’t be utilised for planting and applying fertiliser precisely and economically, controlling insect pests and even harvesting the crop. The system is in place to support any application really and all that is needed is the planter, cultivator or harvester to be engineered and bolted on.”

Andrew reckons that a 10 000 ha property like ‘Bendee’ would only need two SwarmFarm robots to take care of all their weed control operations.

Working through the features of the SwarmFarm robots highlights their simple and robust construction and numerous safety features. Will says the team has worked hard to make diagnosis as simple as possible and the modular components have minimal opportunity for failure. “If there is a problem, the replacement parts can be easily fitted on-farm without specialist technicians and the maintenance is straightforward and well within the capability of any farmer,” he says.

Multiple safety features built into the robots, which make them safer than a person operating a spray rig or tractor, include:

Each robot has an 8 m boom fitted with eight WeedIT optical cameras, 40 nozzles and a 600 L spray tank. Depending on weed density across the paddock this could last all day or an hour. The robot monitors the volume of spray in the tank and makes a decision whether it can reach the end of a run or not before running out of spray. It then returns to a docking station for refilling. At the moment, a person is required to refill the spray tank but plans are in place to fully automate the refilling operation within the next 8–12 months. The 60 L diesel fuel tank on board gives the machine an operating time of 18 hours between refueling.

WeedIT cameras capture data from a 1 m wide band on the ground using NIR and IR light to detect green weeds in a ‘brown’ paddock. There are five individual sprayer solenoids per camera span, giving one spray nozzle every 20 cm. The cameras are set to turn on three nozzles over a weed to ensure good coverage, which is particularly important if there is a breeze blowing.

The genius of the SwarmFarm system lies in the ‘smarts’ of the SwarmHive base station computer. Located in the grower’s office the SwarmHive takes care of the robots’ activity and decision making and coordinates the workflow of all the robots operating in the paddock.

“If one machine is going slower due to higher weed numbers then the SwarmHive will reallocate the other robots to cover the extra area so that the whole paddock operation is completed at about the same time and all the robots come back to the docking station together,” says Will. “It is updating in real time and making decisions about the weather conditions, mapping weed density, ensuring the robots are operating efficiently and sending alerts if any problems arise, such as a pump malfunction or an obstacle detected.”

An on-site automatic weather station located at the docking station monitors key parameters such as Delta-T, wind speed and direction and ensures the robots only operate within the label directions. The SwarmHive automatically turns off the robots and then restarts them when the conditions are within the acceptable range. Integration with an on-site, automatic weather station also provides a reliable record of spray activities and the real-time environmental conditions during the spray operation, such as wind speed and direction. The grower also has ‘on-the-go’ access via an iPad app to monitor and control the robots if necessary, when within the local farm network.