Taking a single shot at weeds

As farmers get their hands on fast and accurate weed mapping technology, the frequency of blanket herbicide spraying can be greatly reduced. With an accurate digital map that shows where the weeds are right now, most boomspray rigs can become low-cost spot sprayers.

For the past two years John Single and his son Tony have been using the air-borne weed sensor, Single Shot, developed by John’s other son Ben, to rapidly detect and map weeds on their dryland cropping property, Narratigah, near Coonamble, NSW. 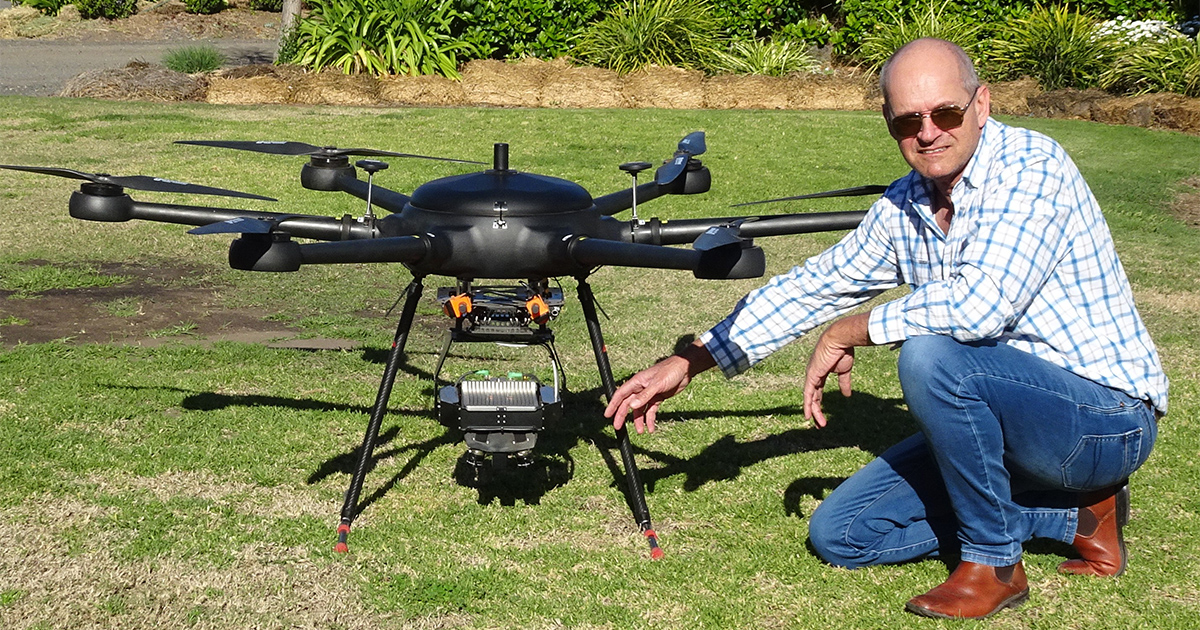 John Single with a drone carrying the Single Shot weed sensor. By separating the weed mapping and weed spraying tasks the Singles can take a planned approach to their weed management throughout the year.

Ben saw the benefits of separating the weed detection and weed spraying tasks and set about building the platform and working with Robotic Systems to bring the idea to reality.

“The main aim is to stay ahead of herbicide resistance,” says John. “Ten years ago we started work on developing drone-mounted sensors that could take over the task of detecting weeds in a green-on-brown situation. Many sprayers, particularly later models, do not require any modifications and there are many benefits in having the weed mapping done separately rather than on-the-go.”

Weed maps enable growers to take a planned approach to their weed management throughout the year and to build a historical record of weeds in a paddock. The Single Shot sensor maps green-on-brown but are not limited to fallow situations. The sensors can be used in newly sown crops to map weeds that emerged on the planting rain or were missed in a previous application.

These patches, or individual weeds, can be treated in-crop or a pre-emergent can be applied to the patches at the end of the season. The sensor can also be used in-crop to identify high biomass areas within a paddock where high weed density requires more drastic action, such as cutting for hay, and in wide-row crops where the canopy does not fully close and weeds can be detected between the rows.

Screen shot of the Trimble guidance screen in operation with a Single Shot spray map.

The Singles have used the Single Shot technology in several different management scenarios already and the possibilities seem endless. John says they have used the sensor to identify survivor marshmallow and milk thistle plants in fallow and then spot spray them with a high rate of Starane to prevent seed set. They have mapped feathertop Rhodes grass in wheat to generate a map for applying pre-emergent herbicide post-harvest and have filtered data to segregate weeds based on size, giving them the option to apply a blanket spray on smaller weeds and a herbicide spike to treat larger weeds, or to use a second boom to apply two different products or rates. Where pre-emergent herbicides are used, a perimeter determined by the user can be added to cover the seed distribution area of the mother plant.

Another important role for Single Shot at Narratigah is to scout for survivor weeds after herbicide applications. The Singles crop 4500 ha and can map the farm at a rate of up to 300 ha per hour. This is one of the most important tasks in a herbicide program and yet it is generally not done effectively due to the time required. Having ‘eyes in the sky’ makes routine and accurate scouting practical after every spray treatment.

The sensor is capable of covering 300 ha/hr under continuous flight or targeting weeds greater than 5 cm diameter. Under normal operating conditions, and including battery changes, the Singles achieve a work rate of around 200 ha/hour. Critically, data processing can be done in the field, if the internet is available at the site, and is done at a speed 1.7 times faster than flight time.

Once a weed map has been created, the drone can be sent out again to take high resolution imagery of plants in specific locations in the paddock for identification purposes, allowing John and Tony to plan a herbicide program with their agronomist, based on exactly what’s in the paddock.

When it comes to spraying, having the weeds mapped before the spray operator gets in the cab means that the job can be done when conditions are suitable, including at night.

The real power of the Single Shot system is the ability to run simulations and to re-process the data to fine-tune a herbicide program based on weed size or density. The sensor requires just a 1 cm ‘brown’ perimeter around a weed to be able to detect the weed size.

The weed maps are built from images that are ten thousand times higher resolution than satellite images, giving a 1 cm sampling size. Every part of the paddock is photographed twice so obstacles such as stubble occlusion can be significantly reduced. The drone flies at a height of 75 m, following a pre-determined path, and can also be flown lower and or slower if necessary to collect specific data. The sensor also accurately identifies stressed weeds.

“Information is power and this has really put us back in control of our weed management,” says John. “We know how much chemical to buy to do the job at hand, we know the costs and can alter the chemistry to suit a budget if necessary, we can choose to blanket spray or spot spray, and our ability to apply the double knock tactic is greatly improved.”

In a bid to be one step ahead of the game, the Single Shot software will also calculate the shortest path for the sprayer, which is most useful when doing spot spraying on an ATV, or in the future, to deliver herbicide via a drone-mounted sprayer (UAV) or autonomous vehicles.

“We ran a scenario for treating about two thousand survivor weeds in a 125 ha paddock using a spray drone,” says Ben. “To apply a blanket spray to the paddock, the spray drone would need to travel about 310 km. Using the Single Shot software we determined the shortest path to reach all the weeds, which cut down the time required to do the job to just two and a half hours. The sprayer would only be applying herbicide for 16 km of the 54 km flight, and just 5 per cent of the paddock would have herbicide applied.”

Left: Actual weed coverage in a 125 ha paddock (blue line is the boundary, and purple is weed). Right: The path that the UAV would travel using the shortest route computation.

Weed mapping using tools and systems like Single Shot are putting growers back in the driving seat to cost-effectively and consistently implement the WeedSmart Big 6 tactics that underpin sustainable herbicide use and maintain productivity gains through no-till farming systems.
Back to articles