Taking the competition to the weeds

Competitive crops are the ultimate weapon against herbicide resistant weeds as a non-herbicide tactic that suppresses weed germination and boosts crop yield.

When stubble retention and harvest weed seed control are also enlisted in the tactical war on weeds then productivity and profitability become the clear winners. 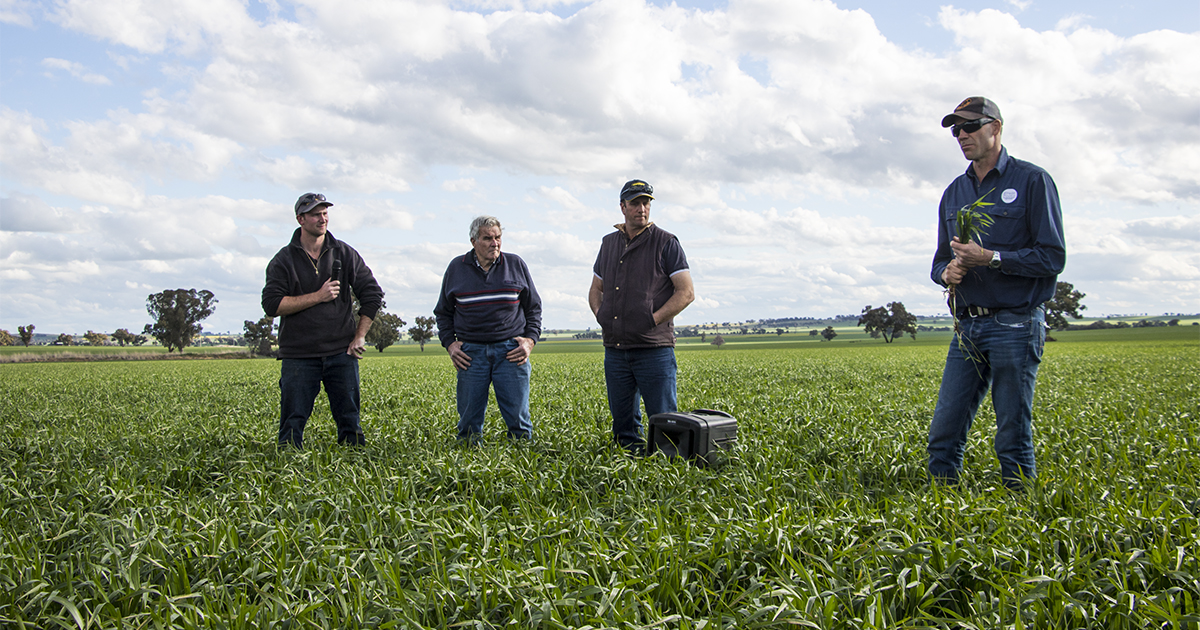 Greg Condon (right) is working with the Fox family at Marrar to build an integrated weed management system that also promotes productivity.

Greg Condon, Grassroots Agronomy says growers can consider putting together several components that enable narrower row spacing, which is known to generate a one per cent increase in grain yield for every inch reduction in row spacing.

“It is important to remember that this benefit can be gained without going to ultra-narrow rows,” he says. “I’d suggest growers go as narrow as they can within the constraints of their existing equipment and farming system to gain as much yield benefit and weed suppression as possible. Then, when it’s time to buy new equipment growers could look at what’s available that would enable more competitive configurations.”

One system that some of Greg’s clients are using combines stubble management and narrow rows using a disc seeder at planting and a stripper front at harvest.

“The real advantages of stubble retention are seen in improved water holding capacity in the soil, which enables earlier sowing,” says Greg. “One year of retained stubble is generally not a problem for any of the modern seeders but we are seeing disc seeders do a better job handling stubble accumulated over a few years and in various stages of decay.”

Front loss from a stripper front can be 1–2 per cent but in some cases this can be compensated by reduced harvest cost and header depreciation as stripper fronts harvest faster. Correct harvester and front setup is essential to minimise harvest losses.

Including canola and pulses in the crop rotation also plays an important part in managing the quantity and decomposition of crop residue, particularly in a narrow row configuration.

Pulses and canola crops assist in stubble management across the rotation.

“Using a stripper front at harvest greatly reduces the amount of crop residue that is cut, chopped and spread out the back of the harvester,” says Greg. “The rearwards rotating rotor and stripper fingers strip the grain off the heads and leave the bulk of the crop residue standing in situ. About 85 per cent of the threshing occurs at the front end of the harvester, enabling double the harvest capacity of a draper, using 60–70 per cent less engine power and 60 per cent less fuel.”

Grower experience suggests that stripper fronts work well in lodged crops and still allow the operator to have the front down low to collect any weed seeds, such as annual ryegrass and brome grass, present at harvest. This is particularly effective if the crop is sown on narrow rows, forcing the weed seed heads upwards in the crop canopy.

Research into the efficacy of this system for harvest weed seed control is planned for the coming harvest.

“The tall stubble left after harvest provides very effective soil shading and protection from drying winds over summer to retain more moisture and enable early sowing, rather than growers needing to wait for breaking rains,” says Greg. “The stubble dries and becomes brittle rather than rotting on the soil surface, making it easier for the disc seeder to operate.” 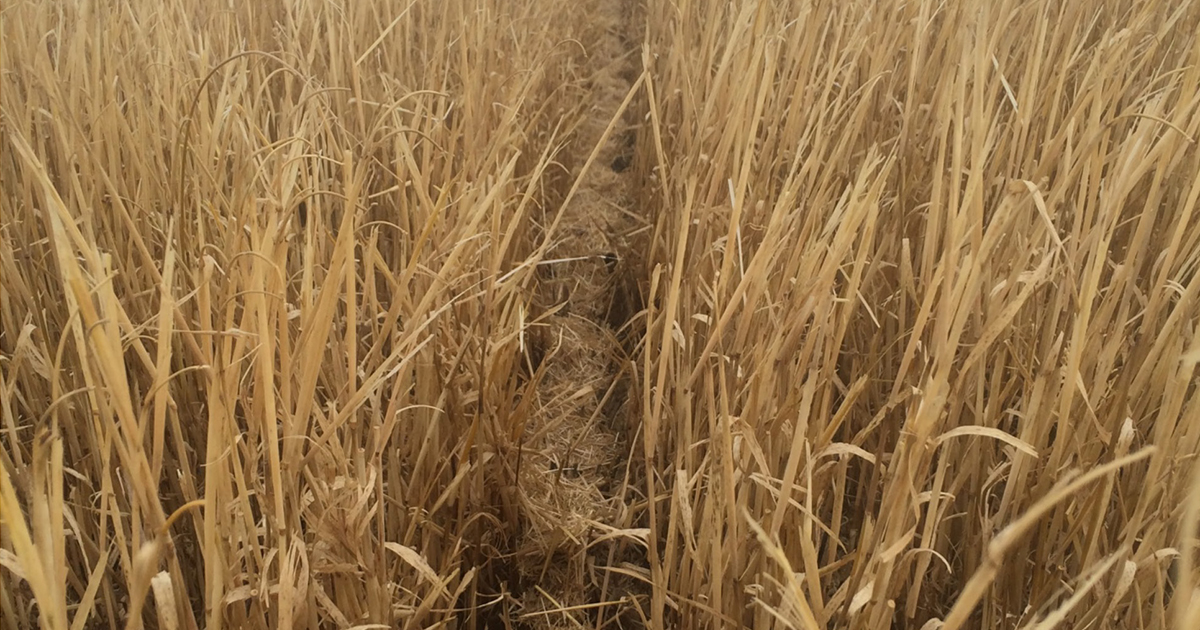 The tall stubble left by the stripper front at harvest has widened their planting window all the way from January to May, giving them incredible flexibility in their cropping program decisions. The chaff line is subject to a high level of shading and higher moisture conditions that suppress germination very effectively.

Harvest weed seed control is an additional component that growers like Daniel Fox at Marrar, NSW are adding to the ‘strip and disc’ system. Daniel has moved away from narrow windrow burning and now uses a chafflining chute to deposit the small amount of chaff, along with weed seeds, into a thin band behind the harvester. This contains the weed seeds to a very small portion of the paddock where they either rot away or have to face stiff competition from the following crop.

“We are putting much more emphasis on cultural weed control methods now and reducing our reliance on herbicides,” says Daniel. “The tall stubble has really widened our planting window all the way from January to May, which gives us incredible flexibility in our cropping decisions. The system is easier to manage if you start with low weed numbers but we really believe that it can be used to drive down weed numbers after a blow-out too.”

In a nut-shell, Daniel and his father David have implemented a controlled traffic farming system based on 16.5 cm row spacing, competitive cultivars, disc seeding, stripper front, chafflining, double-break cropping and sowing east-west where it is practical. On the herbicide front they have a strong pre-emergent program and utilise double-knocks and crop topping to manage in-crop survivors. 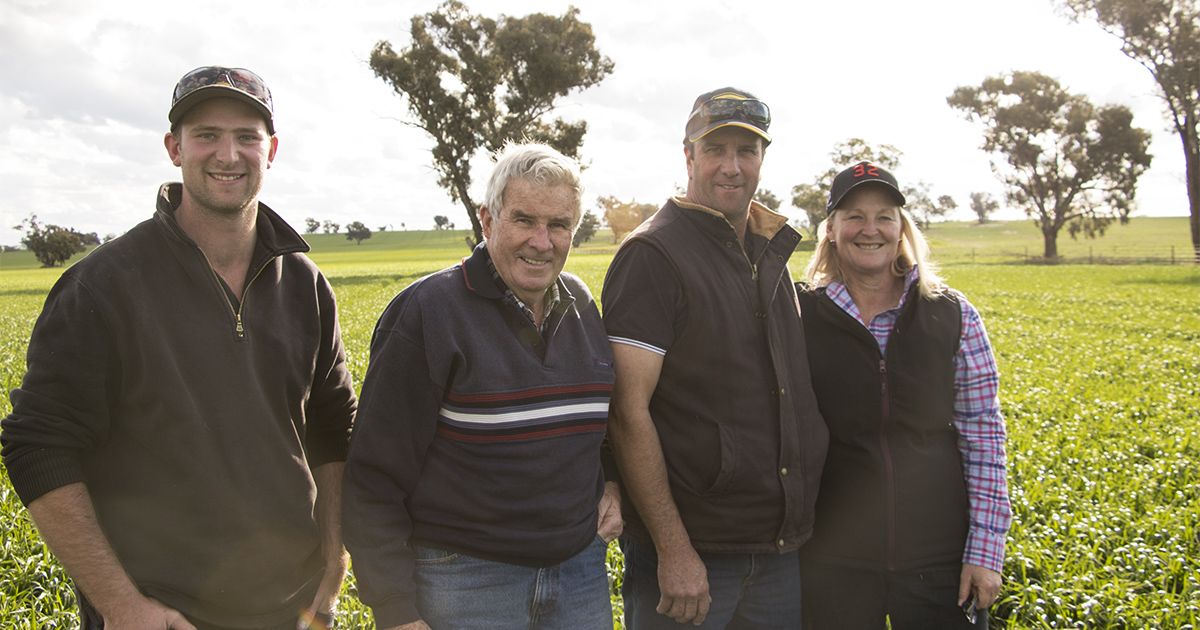 The Fox family of Marrar, NSW have implemented a controlled traffic farming system based on 16.5 cm row spacing, competitive cultivars, disc seeding, stripper front, chafflining, double-break cropping, and sowing east-west where it is practical. On the herbicide front they have a strong pre-emergent program and utilise double-knocks and crop topping to manage in-crop survivors.