Using the right tool at the right time is central to the implementation of a diverse weed control program. Surface disturbance is one tool that can put pressure on the weed seed bank and help provide a clean seedbed for the crop.

In an otherwise no-till farming system, using a skim plough, harrow, rake or disc chain implement to disturb the top few centimetres of soil can stimulate an even germination of weeds that can then be controlled prior to planting the crop.

This tactic is best suited to weeds such as annual ryegrass, paradoxa grass, wild radish and fumitory, which are easily released from dormancy. Soil type is also very important, with surface disturbance tactics being considered not suitable for sandy soils, non-wetting soils and those that develop surface crusts.

The effect of soil type is two-fold. One concern is the potential increased risk for wind erosion, and the second is that the autumn tickle relies on even wetting of the topsoil.

The ideal scenario for using the autumn tickle is following 20 mm of breaking rains on suitable soils with moderate to heavy stubble. The resulting germination of seedlings must be treated before seeding, preferably using a double-knock of glyphosate followed by paraquat, or seedbed tillage.

Shane Kelly’s family has farmed at Booleroo Centre, in South Australia’s low rainfall zone for around 100 years. For the last 50 years, their focus has been on restoring the stony red brown earth soils that had suffered from severe erosion during the previous 50 years of farming. 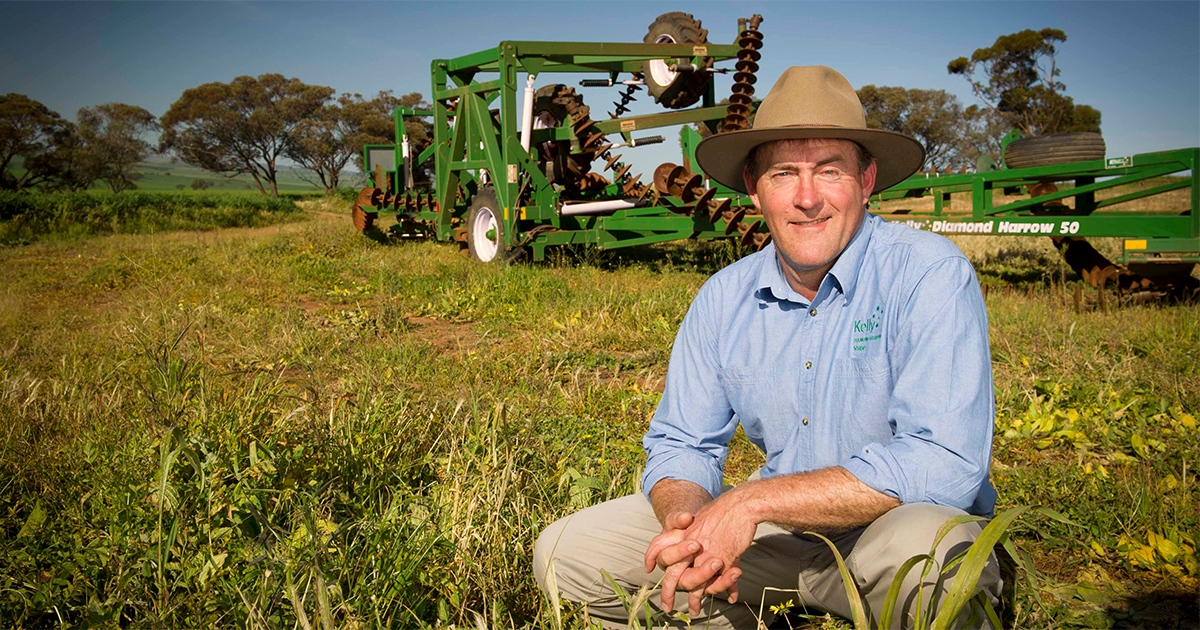 Shane Kelly, Kelly Tillage has found the autumn tickle strategy gives them at least five or six weed-free weeks after seeding where the crop can establish and compete against any late germinating weeds.

“These soils have only five centimetres of topsoil over a dense clay subsoil. When we started the restoration program in earnest, we would budget for reseeding 20 per cent of the farm,” said Shane. “After years of effective stubble management, we no longer need to budget for reseeding.”

Shane is now leasing their 1000 ha farm to their neighbour so he can concentrate all his effort on their engineering business, Kelly Tillage, which is located on the farm.

“Our journey with shallow tillage implements started in the 1980s when we adopted minimum-till farming and full stubble retention to rebuild our soils and reduce water erosion risk,” he said. “In the early days we used prickle chains to knock down the stubble, and by the early 2000s we had developed blunt disc chains for stubble mulching.”

“Using the chains with clients in New South Wales, we saw they were very effective for managing summer weeds that had escaped herbicide treatment. From 2003 to 2006, there was rapid development of the technology, with weed control becoming the primary emphasis.”

At the same time, the Kellys were also responding to herbicide resistance in annual ryegrass on their own farm. Their initial strategy was to use the blunt disc chain to stimulate weed germination immediately after breaking rains in autumn, followed by a double knock treatment ahead of seeding. Having a large, uniform flush of weed germination results in maximum herbicide efficacy as compared to staggered germination that usually occurs after a rainfall event.

“In 2012, we developed sharp discs that can interchange with the blunt discs and be used to kill the weed seedlings, including crop volunteers, that germinate after using the blunt discs,” he said. “We still had big swathes of ryegrass germinating because there was no suitable harvest weed seed control tool at the time. The weeds would all come up at once, and we could then reduce our reliance on knockdown herbicides by following up with the sharp discs when seeding.” 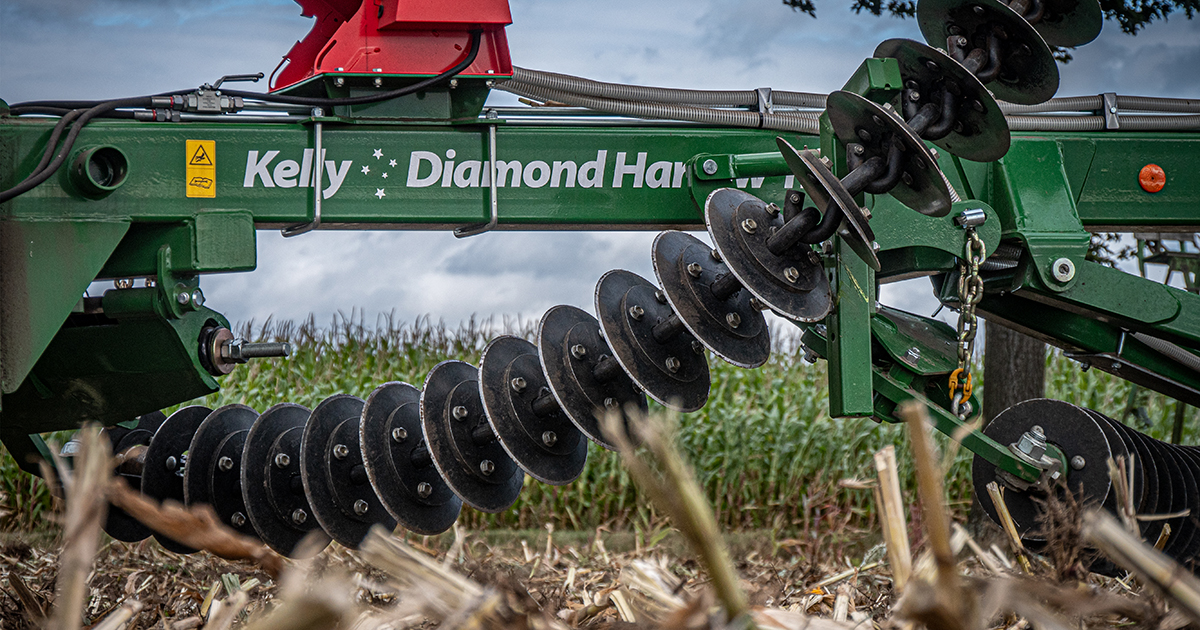 The blunt discs can be swapped for these sharp discs and used to kill the weed seedlings that germinate after one pass with the blunt discs on the chain.

Shane found this strategy gave them at least five or six weeks where the crop could establish in a weed-free environment. They grow crops on 18 cm row spacing and sow at high seeding rates to ensure crops are as competitive as possible, expecting that the wheat and barley might only produce two or three viable tillers in their low rainfall environment (400 mm).

“In the first few years of stubble mulching, we saw evidence of nutrient tie-up in the crop,” said Shane. “Now the system is working well, the soil organic matter has increased and the nutrients cycle quickly. The stubble is left standing until the autumn rains, and then we use the blunt discs to lay the stubble on the ground and stimulate the weeds. The nutrients are tied up for about four weeks, and by the time we plant they are being released and the crops just jump out of the ground on the same amount of starter nitrogen as others in the district apply.”

Shane said their lease farmer has maintained the same farming practices and introduced oaten hay to the rotation with wheat, barley, canola, field pea and sometimes lupins. Weed numbers are now much lower across the farm due to their persistent seed bank management. The disc chains are used once, and often twice, across the whole farm.

“We use all the WeedSmart Big 6 strategies except harvest weed seed control, but realistically the disc chains are fulfilling the same job as harvest weed seed control tactics like chaff lining and impact mills by killing seed that survived the previous year’s control program,” he said. “The operating costs for the disc chain implement, including wear and tear, are typically less than $10/ha, and the operation rate is normally around 15 ha/hr.”

Kelly Tillage is a WeedSmart financial partner sharing in the philosophies of sustainable herbicide use and diverse farming systems in Australia and around the world.