Tom and Nikki Lampe, Bobbiwaa Station, Narrabri used their cropping land to feed their cattle and sheep through the last drought and in turn the livestock kept the weeds at bay.

Herbicide resistance is present in the district and the Lampe’s first experience with resistant weeds was as a result of seed being brought onto the property on a grader bucket used to fix some washouts in a pasture paddock a few years ago.

“All of a sudden we had annual ryegrass plants fully resistant to the Group 1 [A] chemistry, even though we had no history of herbicides on our grazing paddocks,” says Tom. “We are determined to keep weed numbers low and minimise the impact of resistance on our cropping choices.”

The family runs 1000 cattle and 3000 sheep on their 4047 ha property, which includes 750 ha of cropping land. The cropping area is split into three 250 ha paddocks, each with a 5 ha ‘cooler’ so Tom can contain the livestock and manage their access to fodder crops and stubble. 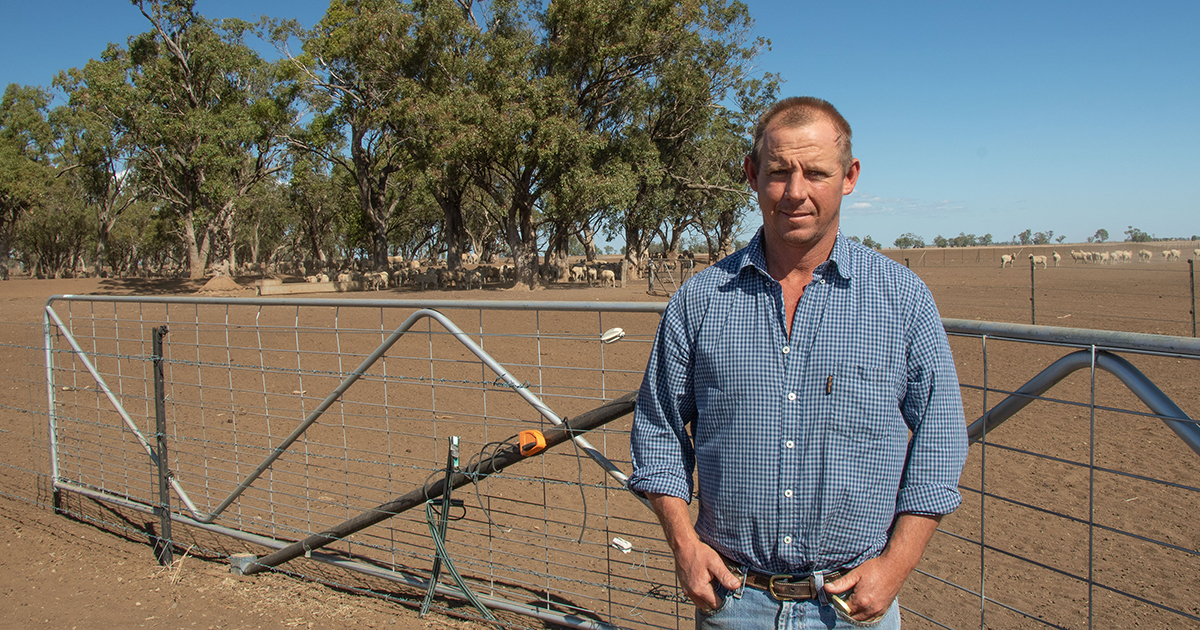 “Primarily we use livestock in the cropping paddocks to deal with weeds that are hard-to-kill with herbicide,” he says. “Our normal rotation is wheat, barley, chickpea and sorghum. After harvest we spray the paddocks with glyphosate plus 2,4-D, and use the sheep to provide the double knock.”

If weeds are allowed to set seed, a small problem can quickly become acute. For this reason, Tom has implemented a management system that has a weeds focus and he aims to suppress weed seed set at every opportunity.

“Ongoing reliance on herbicides is not sustainable, so we need other options,” says Tom. “The livestock provide many different tactics for non-herbicide weed control, taking the pressure off the herbicides by keeping weed numbers low.”

In the past, the Lampes would spray weeds along fencelines, but they now use non-herbicide tactics to prevent weeds encroaching from the borders. “We know that annual ryegrass gets away if you do nothing, so we plant the crops right up to the fenceline and bale a few rounds as silage in August or September before the weeds go to seed. After making the silage bales we then cut firebreaks around the paddocks with tandem offset discs, which also provides a level of mechanical weed control.”

Tom also windrows barley stubble behind the header to make into round bales for on-farm use, although he doesn’t cut the stubble too low as he also wants to maintain stubble cover in the paddocks. Desiccation in chickpea and crop-topping in canola also helps prevent seed set in late germinating weeds.

The Lampes run backgrounding and breeding operations for both sheep and cattle, and use the silage and grain stored on farm to provide high protein feed for finishing livestock.

“Breeding stock can be run on fallows provided they are moved onto pasture when they are close to lambing or calving,” says Tom. “This way they are on a rising nutritional plane and can be left alone so there is no mis-mothering.”

While sheep have a long history at Bobbiwaa, when Tom returned home after university, cattle were added to the mix, primarily to make better use of the crop stubble and control fallow weeds.

To make the most of the livestock in the system, Tom invested in new fencing and water infrastructure. Although this was expensive, it was essential to make the new system work without the need for additional labour.

“Sheep do a great job killing weed seeds,” says Tom. “They can digest the hard, outside layer of weed seed as well as eating any grain that is left after harvest. We put the sheep in first to clean up any seed and then put the cattle in afterwards to forage for any weeds growing in the paddocks.”

“During the drought, we kept planting crops in the hope of a good season but when the seasons failed, we used the crops as fodder to keep the livestock operation going.” He says cattle from western areas tend to forage better for weeds and do well on the stubble compared to cattle from softer country.

Livestock start grazing on barley stubble from harvest to March and then move onto sorghum stubble from February to June, then chickpea stubble for a short time before moving into the oats and back to barley stubble. Tom likes to put the sheep or cattle onto stubbles soon after applying the knockdown spray, and before the herbicide fully kills the weeds.

The stubble provides a year-round feed resource and allows Tom to rest their pasture paddocks. Tom also conserves fodder in the form of silage, barley straw hay, and rolled barley and chickpea is mixed into feed supplied to finish animals before selling direct to the meatworks. 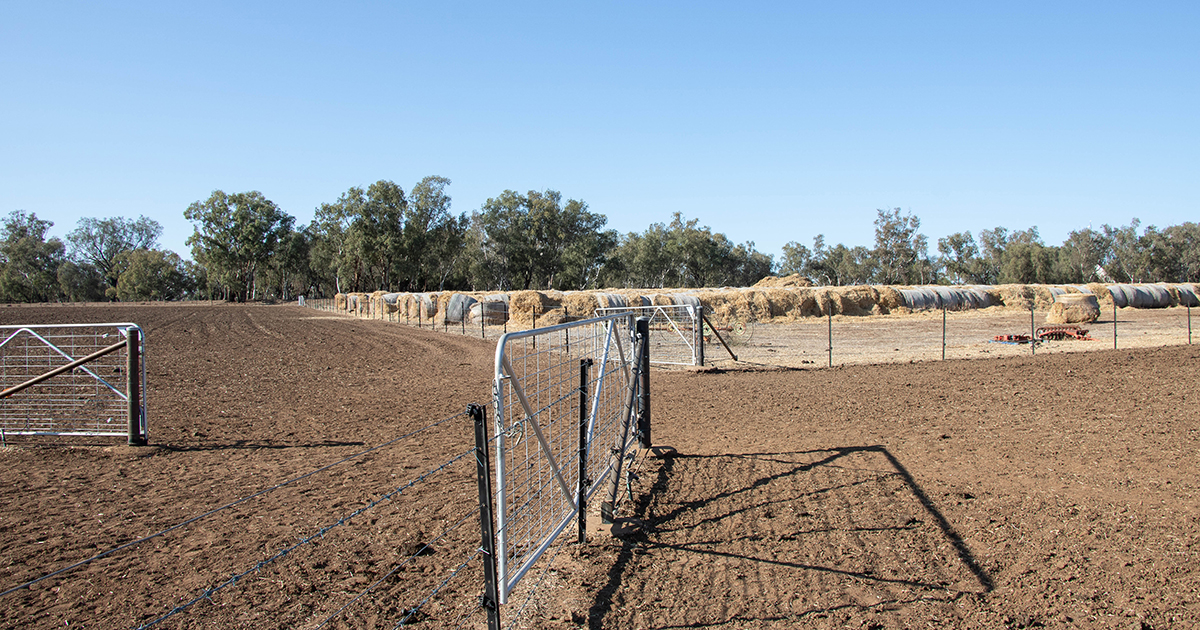 This means the Lampes can carry the same number of stock as they would if the cropping area was pasture, while still maintaining a cropping program, and achieving more sustainable weed management.

“The livestock have a controlling effect on some of our hard-to-kill weeds like fleabane, but they avoid the melons and burrs. It is really important to spray the fleabane early to get the best result,” he says. “The sheep use the weeds to balance their intake of stubble and maintain healthy gut function. If the cropping paddocks get wet during the fallow, we move the livestock into the coolers so they don’t compact the soil.”

The cropping soils at Bobbiwaa are mainly chocolate loam and black clay soils, which repair well after livestock are removed, but there are some sandier soils that are more difficult to rejuvenate if the livestock are left in the paddocks when wet. The self-repair characteristic of their soils means Tom can direct drill their crops, even after they have been grazed in the fallow. Generally, the sheep tend to stick to the spray tracks while the cattle graze evenly across the whole paddock.

The ‘coolers’ each have clean bore water supplied to troughs, and shade for the livestock. The livestock graze the paddocks in the mornings and afternoons and use the coolers to ‘camp’ during the heat of the day and overnight. This means there are no compacted and heavily manured areas in the cropping paddocks and the livestock are easy to confine in wet weather.

“People often have concerns about livestock causing compaction on cropping country, but this is not our experience,” says Tom. “I really think many farmers have lost out on a lot of income by not having livestock in their system.”

“We can harvest sorghum in February then run 500 sheep, followed by 500 cattle, on stubbles in 250 ha paddocks until May, and easily direct drill the next crop within a few weeks of the livestock being removed.”

Tom says the coolers are the key to avoiding problems with compaction. The animals are removed from the cropping area when it is wet and they choose to camp in the coolers close to water and shade. 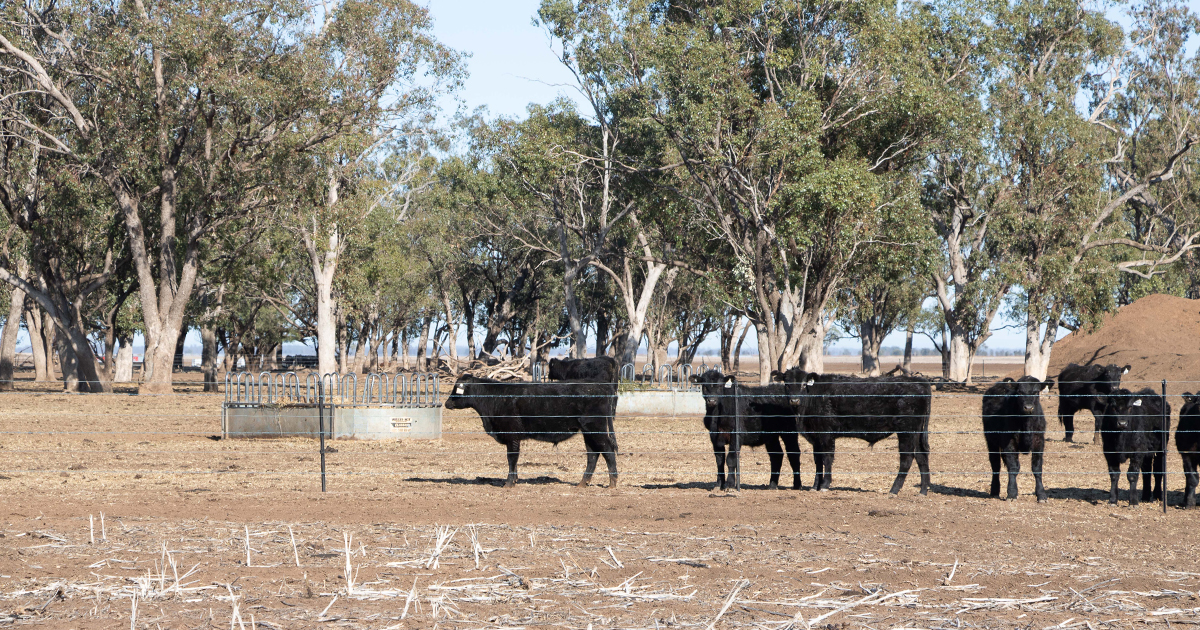 The coolers provide access to supplementary feed, water and shade.

“We take livestock out of the cropping paddocks if there is 30 mm or more of rain, and put them on pasture for two or three weeks,” he says. “Our farming country gets priority, so after rain we often won’t put the cattle back in because that moisture is needed for the next crop. It is important to have plenty of grazing country available to make this work in a wet year.”

“At seeding, the soil is firm on the surface but not cloddy,” he says. “Stubble laying over the planting row can be an issue, but we now have a Boss disc opener planter to cut through stubble. If necessary, we can put starter fertiliser down earlier, before the planting rains, to create a furrow for seeding.”

During the drought, livestock were often on the stubbles for longer than usual, and Tom decided to retrofit a few tynes to an old planter to pre-cultivate the planting row to avoid issues with early seedling vigour in cotton.

Tom plans to reintroduce a lucerne phase within the next few years and has now expanded his cropping program to include canola and cotton. “Lucerne is a really good option for us when the seasons allow,” he says. “Lucerne provides very strong competition for weeds and we can spray-top with paraquat, which encourages the cattle to preferentially graze any weeds.”

Tom says the paraquat kills the weeds without setting the lucerne back too much. “It also initiates the production of tannins that reduce the risk of bloat. We can graze the paddocks in sections to maximise the grazing value and manage the intake of this high-quality feed, but it is also more labour intensive.”

Weed resistance is currently a significant issue in the district and the Lampe family is continuing to calibrate their management to tackle the problem. Having livestock adds diversity to the system, which is good for many reasons, but it also requires some additional gear, possibly more staff, and more management decisions.

The Lampes have found that livestock and cropping enterprises can co-exist, provided all components are managed well and there are multiple benefits for including the livestock – in addition to the weed control advantages.

Tom and Nikki Lampe, Narrabri use livestock to kept weeds at bay in their fallow cropping paddocks and minimise compaction using 'coolers'....