Tackling weeds from the ground up.

Trevor and Renae Syme are throwing everything they’ve got at revamping non-wetting sands and driving down weed numbers on their property at Bolgart, WA.

A few years ago they began an extensive liming and clay delving and spading program across 50 per cent of the 3500 ha cropping area to improve the water holding capacity of the natural non-wetting sands. With 75 per cent of the affected area now treated Trevor is looking forward to having this expensive but very beneficial operation behind him. 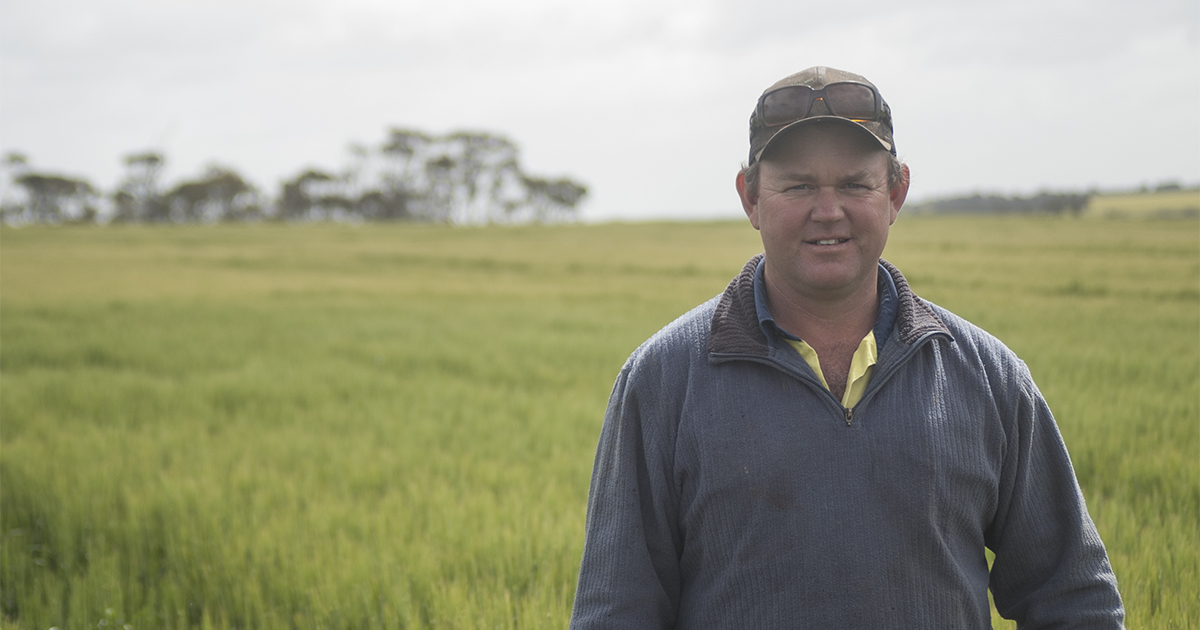 Treating the non-wetting soils has assisted with weed control through 40 per cent higher yielding crops, more even crop germination and better efficacy with the pre-emergent herbicides.

“Treating the non-wetting soils has assisted with weed control through 40 per cent higher yielding crops, more even crop germination and better efficacy with the pre-emergent herbicides,” says Trevor. “It has also enabled us to grow canola in paddocks that were previously not an option and crops seem to finish better and are less prone to frosting.”

They have also achieved good results building soil organic matter with brown manured cereal rye crops. Trevor has trialled summer crop brown manuring too but the results over three seasons were unreliable and he has decided to look for other options to reduce evaporation over summer and reduce the need for summer weed control.

The Symes’ farming system is 100 per cent controlled traffic and stubble retention with a long winter crop rotation of lupins, wheat, canola, wheat, barley, with brown manured cereal rye grown on the soils not suited to canola.

The summer fallow spray program involves 2,4-D ester, triclopyr and glyphosate to control melons, caltrop, fleabane, sowthistle and volunteer cereals. For the last 5–6 years Trevor has applied a double knock of glyphosate followed with paraquat in preparation for sowing. “We try hard to get the timing right and target the right size weeds with the double knock,” he says. “We also avoid mixing a pre-emergent in with the paraquat because the aim is to get the paraquat on weed leaves using a high water rate and fine droplet size, whereas the aim with the pre-emergent is to achieve even coverage of the soil. Doing the pre-emergent spray separately costs us more but I believe it is worth using the right boom set up for the two jobs.”

“Rotating crops and herbicide modes of action, and using the double knock tactic, are critical to our weed management program,” he says. “RR canola, Clearfield barley and lupins all have a fit in the crop rotation and allow us to rotate herbicides effectively. The imi-tolerant barley has enabled quite effective control of brome grass and we croptop the canola with glyphosate.In the lupins we are using a pre-emergent propyzamide application followed with clethodim in-crop and finish with a croptopping spray of paraquat.”

Trevor is finding that weed control in the lupin phase is more critical than it used to be, but the value of lupins in boosting yields in the following wheat crop motivates him to look after the lupin crops, plant into clean paddocks and do everything he can to keep weed numbers low.

The Symes have had good success with high biomass canola on sandy soils where multiple germinations of wild radish are the norm. They usually plan their crop and herbicide program with their agronomist at the end of September and then revise it in February or March.

Trevor is going away from the current move toward narrow row spacing and disc seeders. “We are changing back from a disc seeder at 305 mm spacing to tines on 381 mm with a split boot to sow cereals in paired rows and canola and lupin in single rows,” he says. “We are working on the idea that less rows equals less disturbance equals less weeds in a controlled traffic system. The slightly wider row spacing also makes it easier to handle the stubble load accumulated over several years and allows us to inter-row sow.”

He has found that high tillering wheat varieties, such as Magenta, offer an alternative way to increase crop competition through additional shading of the inter-row.

In the 2015 harvest the Symes added a chaff deck to their weed control progam, directing all the chaff, and weed seeds, into the harvester wheel tracks. Trevor harvests weedy paddocks first to maximise the value of harvest weed seed control and has found the chaff deck easy to use and results in relatively few weeds surviving in the tramlines.

The biggest benefit of the chaff deck is that weed seeds are collected across the whole farm every year, and concentrated in the inhospitable tramlines.

“The biggest benefit is that we can collect weed seed across the whole farm every year where previously we have only really been able to do narrow windrow burning in the canola phase. Now at harvest the whole job is done, with no need to return to burn.”

“It is great to know where the weeds are and they are dumped on a hard, inhospitable surface,” he says. “Any escapes are easily collected at the next harvest. We also have a back-up plan to use a shielded sprayer to weeds in the tramlines, but we really want to avoid using this option.”

“In fields with high weed numbers in the tramlines we have tried simply driving a tractor, without any implement, along every tramline to achieve a crimp-rolling effect. This seems to have been a cost-effective way to stop seed set in weedy tramlines.”

In fields with high weed numbers in the tramlines Trevor has tried simply driving a tractor, without any implement, along every tramline to achieve a crimp-rolling effect (right).

Annual ryegrass, wild radish and brome grass are the main weed challenges on the Symes’ property. Trevor has done some herbicide resistance testing but generally takes the approach that all weeds present are likely to have some level of resistance. “The key is to keep weed numbers low so we take care to spray when weeds are small and avoid frost windows and high temperatures when the sprays are less effective,” he says. “We also use quite high water rates – 80 L/ha for most post-emergent herbicides and 120 L/ha for pre-emergent herbicides and paraquat – and have two sprayers so we can cover as much ground as possible when the conditions are right.”

“Fencelines and fire breaks are a weak point in our farming system as a source of glyphosate resistant weeds,” he says. “We have removed as many fences as possible, now that we don’t run any livestock, and are actively looking for an alternative herbicide that is not used in crop to manage weeds on the firebreaks.”

Trevor takes considerable care when choosing seed production paddocks, ensuring weed numbers are low to start with and then treating the paddock as a nursery. He harvests the seed crops early and cleans the seed prior to planting.

Trevor and Renae Syme are throwing everything they’ve got at revamping non-wetting sands and driving down weed numbers on their property at Bolgart, WA....