Read time: 2 minutes
Resources / Articles / News / Use your crop as a weapon

Use your crop as a weapon

Sowthistle and fleabane have both proven to be difficult to control with herbicides and now there are herbicide resistant populations being identified at widespread locations. With limited herbicide options, available researchers have been investigating non-herbicide tactics that might help bring these weeds under control.

The optimal tactic would be one that could be easily implemented as part of every-day farming practice. Using the crop as the weapon, experiments were designed to determine if crop competition could be used to combat weeds.

The results have been very encouraging, with weeds researchers like Dr Michael Widderick from the Queensland Department of Agriculture, Fisheries and Forestry, concluding that narrow row spacing and increased crop density can make a real difference to in-crop weed populations, and even reduce weed germinations in the following fallow.

“When the crop canopy closes over early and is dense enough to completely shade the soil surface, weed seeds are much less likely to germinate and the plants that do germinate set less seed,” he said. “Reducing the number of weed seeds that germinate in a season makes a significant difference to the number of viable seeds present in the soil, particularly for species, such as sowthistle and fleabane, which have seed that only remain viable for up to a few years near the soil surface.” 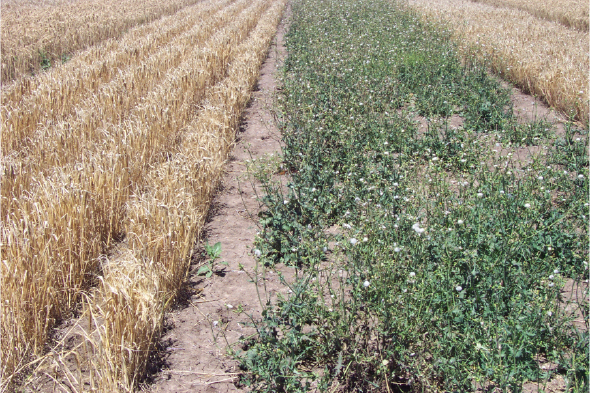 A comparison of sowthistle density (Sonchus oleraceus) in a crop plot and non-crop plot showing the significant level of control achieved in a competitive cereal crop.

“Increasing crop density only had a small impact on fleabane density but narrow row spacing, decreasing from say 50 cm to 25 cm, reduced fleabane populations by about 50 per cent,” said Dr Widderick. “When density was increased and row spacing narrowed, the combination brought about a 90 per cent reduction in the number of seed heads produced.”

“When looking to use crop competition as a weed control tactic it is necessary to look for the best crop species and variety for the location,” he said. “There are winter cereals, summer crops and winter pulses that can achieve the desired effect of shading about 90 per cent of the soil surface as soon as possible after sowing.”

Dr Widderick said the trend toward wider row spacing to conserve soil moisture can increase weed pressure in-crop, so a compromise is required to balance savings in herbicide use against the cost of additional seed at planting.

“Disease risk also needs to be considered in crops affected by fungal diseases that can thrive in dense canopies,” he said. “Choosing species and varieties with greater disease resistance is part of the decision when using crop competition to combat weeds like sowthistle and fleabane.”

Achieving improved weed control and reduced seed set in-crop reduces the pressure on herbicide use in-crop and in the fallow.