Warren Treasure farms just 15 km from Geraldton in Western Australia and has found the iHSD impact mill’s all-in-one weed seed destruction to be a real boon over the last five seasons.

With several small acreage neighbours, and the farm being in close proximity to the highway and Geraldton airport, the Treasures had been reluctant to use any of the harvest weed seed control tactics that involved burning.

“We did try narrow windrow burning in canola but found it difficult in cereals. Then we considered using a chaff cart, but decided this option was not well suited to the hilly terrain of the farm,” said Warren. “The terrain also rules out controlled traffic farming, so chaff decks and chaff lining were not really good options either. The impact mills are well suited to our operation as all the chaff and stubble is spread evenly back on the paddock and there is no follow-up treatment required for the weed seed.”

In 2017 the family had a hydraulic iHSD mill installed on a New Holland 8.90 harvester, but it soon became obvious they needed to upgrade their harvester for more power and better cooling. The following year they purchased a New Holland CR 10.90 harvester with the iHSD unit, and then upgraded to a belt-drive vertical iHSD unit in 2020. 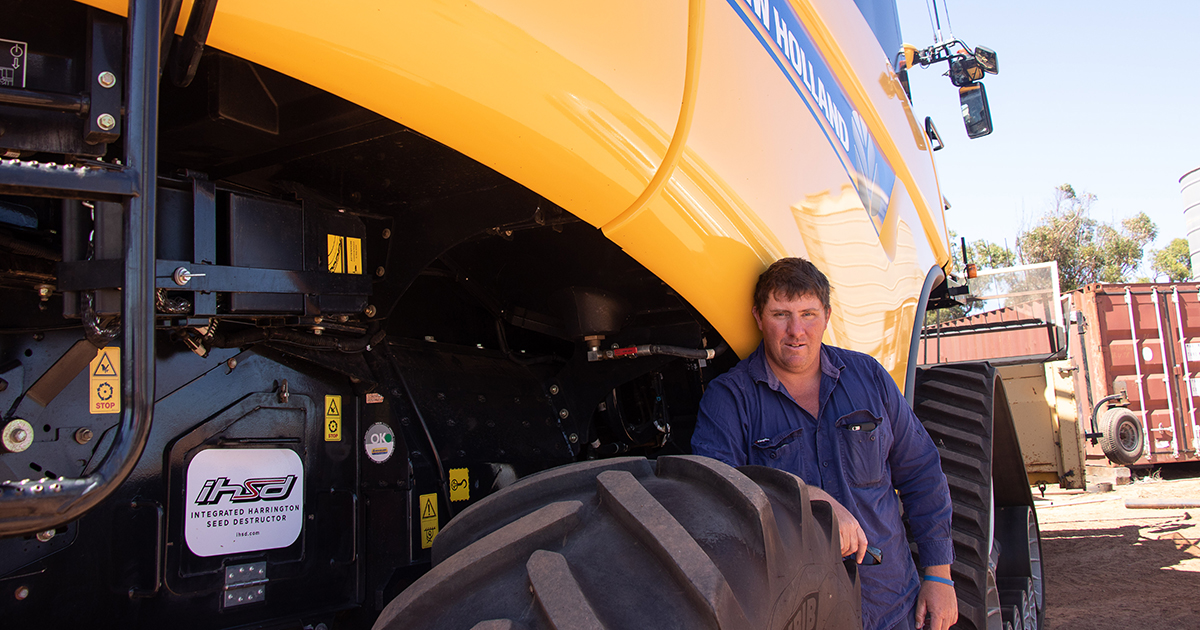 Warren Treasure has since upgraded to a belt-drive vertical iHSD unit fitted to their New Holland CR 10.90 harvester.

“New Holland harvesters have very effective straw separation features and the shape of the blades in the new iHSD mills is able to handle a higher throughput than the earlier model,” he said.

Having started out with some areas of the farm heavily infested with wild radish, Warren is hoping that they are getting close to have cleared the seed bank that can remain viable in the soil for about seven years.

“The paddocks are definitely much cleaner, and we can generally rely on just one pre-emergent and one post-emergent spray to treat wild radish in crop,” he says. “Any plants that escape the post-emergent spray are cleaned up with the impact mill, avoiding the need for a second spray just before harvest.”

The Treasures also saw an immediate and massive reduction in volunteer crop germination in response to using the iHSD. As early as their first year with the impact mill, after the 2017 harvest there was early summer rain that caused a large germination of volunteer crop on a neighbour’s farm and none on Warren’s farm.

Warren, his brother Daniel, and their father Quentin, manage the 2500 ha ‘Appa Springs’ and follow a crop rotation of double cereal (wheat, barley or oats) followed by either lupins or RR canola. This rotation allows them to use Sakura sparingly – just once in the rotation, usually in the second cereal crop. Trifluralin is usually applied pre-emergent in the first cereal crop and propyzamide is applied ahead of canola.

There are no grass selectives used in cereals, and only Velocity remains effective for wild radish. The Treasures take advice on herbicide mixes from their agronomist and rarely apply any mode of action as a single shot. Warren keeps an eye out for any problem areas when spraying.

Any very weedy patches are cut early for hay. The Treasures also grow about 40 ha of oaten hay each year and sell the bales mainly to cattle stations for feeding out during mustering and weaning. The hay provides a backload for trucks that have delivered cattle for processing and live export. 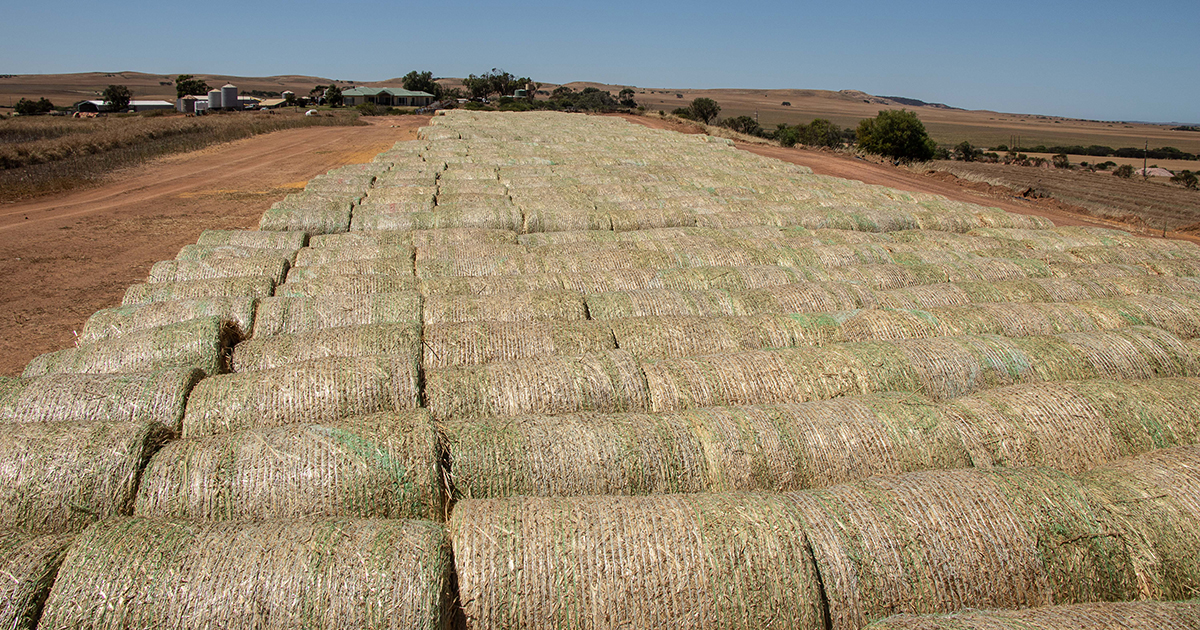 Hay is an excellent control tactic for weedy patches and provides an additional income stream for the business.

Prior to planting, Warren aims to apply a double knock of glyphosate followed by paraquat, particularly as they have confirmed populations of glyphosate resistance in annual ryegrass.

“We always follow any application of glyphosate with a different mode of action,” said Warren. “Since 2018 there has been limited opportunity for a double knock ahead of seeding though, with the majority of the crops being dry sown.”

The 2018 season was a wet and high yielding season with late germinating weeds taking advantage of the lack of crop competition in waterlogged patches.

“It is very difficult to effectively apply in-crop weed control in wet years like 2018,” said Warren. “We had no double knock, no in-crop herbicides, and there were waterlogged patches – perfect for weed blowout. I don’t want to think what would have happened the following year if we didn’t have the impact mill to destroy weed seed at harvest.”

“Our overall aim for using the iHSD is to reduce our reliance on chemicals and overcome herbicide resistance by keeping the weed seed bank low,” he said.

Crop competition and the double knock go hand-in-hand so Warren chooses the best performing varieties for their area that also have weed-competitive characteristics.

“To maximise crop competition, we make sure we clean our planting seed, plant on time and sow at the higher end of the recommended planting rate range, usually 90 kg/ha wheat seed, to establish a high-density plant stand,” he said. “All crops are sown with a tyne seeder on 10 inch spacing and our yields are usually around 3 to 3.5 t/ha for wheat and barley, and 1.5 t/ha for canola.”

The soil types range from heavy clay to white sand, which are prone to the development of a hardpan at the knife points depth. The Treasures have been ameliorating their soils through deep ripping and lime application, which also has a beneficial effect of reducing the weed seed bank and boosting crop biomass to suppress weed germination and growth.

Warren has found that setting up the header correctly for harvest weed seed control is particularly important when it comes to separating weed seed from the grain.

“We have added extra agitator pins in the separator section of rotors and pull wires from concaves on the cleaning chute, depending on crop type, to maximise grain drop-down,” he said. “Cutting at can height means a lot of material is going through the machine and it is sometimes necessary to slow down somewhat, but ground speed does vary quite a bit.”

The Treasures have also endeavoured to remove surface rocks from paddocks to allow cutting crops low at harvest.

“Following the iHSD, stubble management is easy as a result of the low cutting height plus stubble chopping and spreading,” he said. “Once the header has been through the only other job is to spray for melons over summer and seeding is easy, with no obstructions.”

Before moving to the Geraldton area, the Treasure family had been beef producers at Waroona. Having an affinity with livestock they soon established a mutual benefit arrangement to agist a neighbour’s sheep in summer to graze stubble and reduce weed growth. This long-standing arrangement allows the neighbour to carry slightly larger numbers and has had a very positive effect on reducing the weed seed bank.

The Treasures have effectively implemented tactics from the WeedSmart Big 6 to drive down weed numbers and keep herbicide resistance at bay in their operation.