From narrow windrow burning to chaff decks and weed-lining

When you know something works there is a great incentive to find solutions to any problems that might stand in the way of its implementation. The knowledge that harvest weed seed control really works has fuelled the journey that Yerong Creek growers, Warwick and Di Holding, have taken to see the practice implemented on their farms, in every crop, every year.

Over a decade ago they used windrow burning as a way to control annual ryegrass plants that had evaded in-crop selective herbicides. Warwick says they saw great results but stopped due to the additional workload and fire risks. 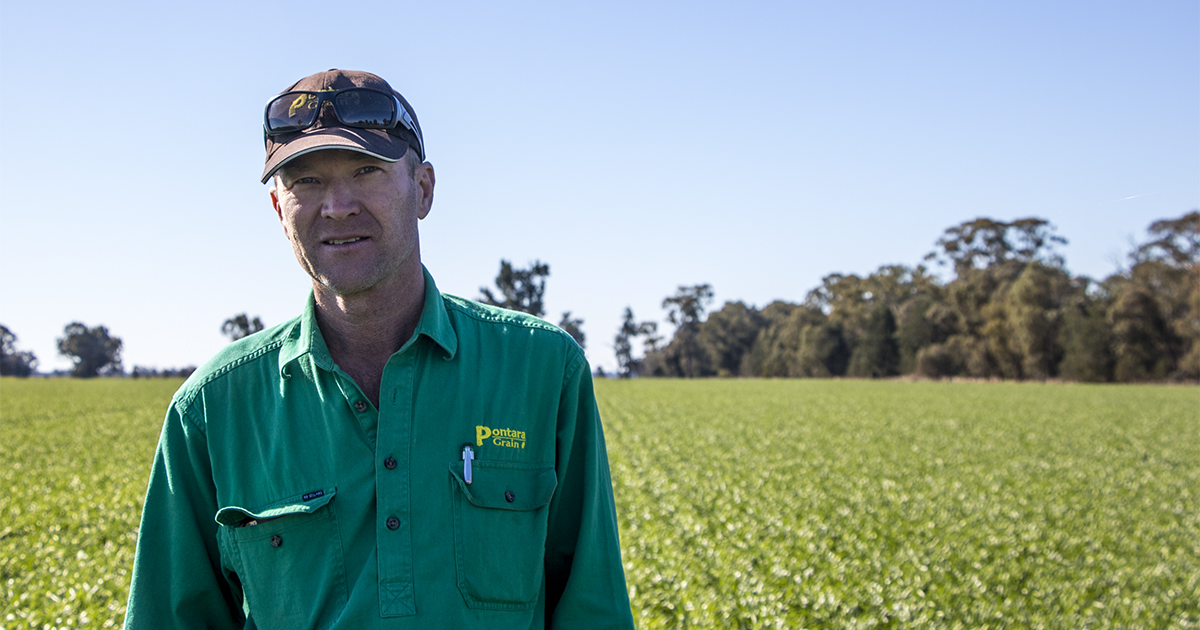 “When ryegrass numbers started to build up again we knew we had to get serious about stopping seed set in these resistant plants,” says Warwick. “We knew narrow windrow burning was effective so we started there, but we were always looking for other ways that didn’t mean extra work or create fire hazards.”

In 2013 Warwick built a narrow chute for the header and they dedicated themselves to narrow windrow burning (NWB) in their canola crops, which represent 25 percent of their cropping land, for three or four years. During this time they also used NWB in some wheat and lupin crops, but the risk of burning the whole paddock and fire escapes was a real concern.

To reduce the time associated with lighting the rows, and to keep traffic on the CTF tramlines, Warwick modified an old trailing boom to carry three gas burners to light the windrows at intervals while travelling along the rows rather than across them. This saved time but there were still fire risks, especially in paddocks with a heavy stubble load from previous seasons.

In addition to the fire risks Warwick and Di also noticed stubble cover was dramatically reduced, variation in soil moisture was affecting planting and it appeared that nutrients were being concentrated into the narrow windrows.

To get away from these disadvantages the Holdings invested in two EMAR chaff decks designed to place weed seed-laden chaff from the harvester onto permanent wheel tracks, which they used for the first time in the 2016 harvest across their 2000 ha property and 700 ha contract farming area. This coincided with 2016 being a very wet winter that resulted in a big blow-out of ryegrass in the wheat crop. In the following faba bean crop Warwick did everything possible to reduce weed numbers and contain seed set. Instead of returning to wheat in 2018 as he usually would, Warwick plans to implement a double break crop tactic by following the faba bean with canola.

The Holdings have been controlled traffic farming since 2006 using 3 m centres so the chaff deck system suits their system perfectly, delivering the weed-laden chaff onto permanent, bare wheel tracks.

“When I went to WeedSmart Week in WA in 2016 we visited Gary Lang at Wickepin and Trevor Syme at Bolgart and could see the results of using chaff decks in their farming systems, which are similar in many ways to ours,” says Warwick. “The idea of dropping weed seed onto wheel tracks every year was very appealing, along with only having to deal with the chaff fraction while still having the straw spread across the paddock.”

“The chaff deck system ticked all the boxes for us so when we returned home we ordered two, one for each of our harvesters,” he says. “One added benefit that we hadn’t counted on is that the chaff on the wheel tracks reduces the amount of dust that is generated when spraying and we are seeing better herbicide efficacy as a result.”

The chaff decks concentrate the weed seeds in the hostile environment of the wheel tracks, making it easier to deploy tactics that specifically target the (predominantly resistant) weeds that might germinate in the wheel tracks.

“Many other growers who have used chaff decks for several years have assured us that most of the weed seed just rots away after harvest but we are not yet confident enough in this happening,” says Warwick. “We had quite significant germination of weeds in the tramlines after our first harvest with the chaff decks and we decided to spray these ‘weed-lines’, which represent just 8 per cent of the paddock.”

The chaff decks concentrate large numbers of weeds into the bare tramlines.

Warwick dismantled the gas burners he had installed on the old bar to light up narrow windrows and has rejigged the bar to carry spray lines with nozzles to spray out six tramlines (3 sets) in one pass.

Warwick’s weed-lining rig can spray out three sets of tramlines in one pass.

“I call it ‘weed-lining’ and use it as a cost-effective way to do site-specific weed control,” he says. “We have found that the weeds growing in the tramlines are more advanced than those growing in the paddock, so having the weed-lining spray bar means I can get on early, before the frosts, and treat the weeds in the tramlines when they are small without wasting herbicide on the rest of the paddock. A blanket spray that would cost $48/ha is replaced with a weed-lining spray costing $3.84/ha.”

Being such a low-cost operation means that it is practical and economic to treat multiple germinations of weeds if necessary to ensure each application is as effective as possible and results in reduced weed numbers.

“Seeing the weeds germinate in the tramlines is also encouraging in a way because you can really see that the chaff deck is capturing the resistant weed seed and putting it where you can deal with it effectively,” he says.

Following the second year of harvesting with chaff decks Warwick has noticed that the chaff material is rotting better in the thicker, two-season chaff rows. The reduced dust levels continue to provide greater efficacy for the summer spraying program.

A move from tine to disc seeding has meant that Warwick now uses minimal trifluralin and as a result has seen an increase in ryegrass survivors in wheat crops. The annual ryegrass on the farm is resistant to Group A dims and fops along with some Group B resistance and some resistance to glyphosate in non-crop areas. Warwick is targeting glyphosate resistance with double-knock and chipping to remove resistant plants before they enter the cropping areas. Black oats is evolving resistance to Group A on some of their heavier clay soils.

Warwick and Di generously hosted other farmers and agronomists on their farm as part of WeedSmart Week 2017 in Wagga Wagga.