Weaponise sorghum crops to take out FTR and ABG

Narrow rows to shade the inter-row.

The common practice of planting sorghum on wide rows has made this crop notorious as a weak link crop that can allow key summer grass species to set bucket loads of seed.

The take home message from four years of research at Narrabri, NSW and Hermitage, Qld, is that halving sorghum row spacing can halve weed seed production in both feathertop Rhodes grass and awnless barnyard grass.

With investment from the GRDC, researchers from the University of Sydney and Queensland Department of Agriculture and Fisheries (DAF) have conducted a range of field trials to identify ways to increase the competitiveness of sorghum and summer pulses.

“This is very significant for sorghum growers who have struggled with controlling these grass weeds in wide-row configurations,” he said. “These weeds are difficult to control with herbicides and there are few chemical options available to growers to control grasses in a grass crop. Any non-chemical strategies that reduce seedbank replenishment are very valuable to growers.”

Dr Widderick said sorghum is often grown on one metre row spacing with an expectation that the crop will have access to more soil moisture. A considerable downside to planting on the wider row configuration is that canopy closure does not occur, allowing weeds to proliferate in the inter-row.

With soil moisture at a premium, there is nothing spare to waste on growing summer weeds. For a sorghum crop to be competitive against weeds it requires adequate stored soil moisture (or access to irrigation) to establish the crop and achieve canopy closure as quickly as possible. This is most reliably done at a row spacing of 50 cm and this trial demonstrated that row spacing did not significantly impact crop yield within a season. 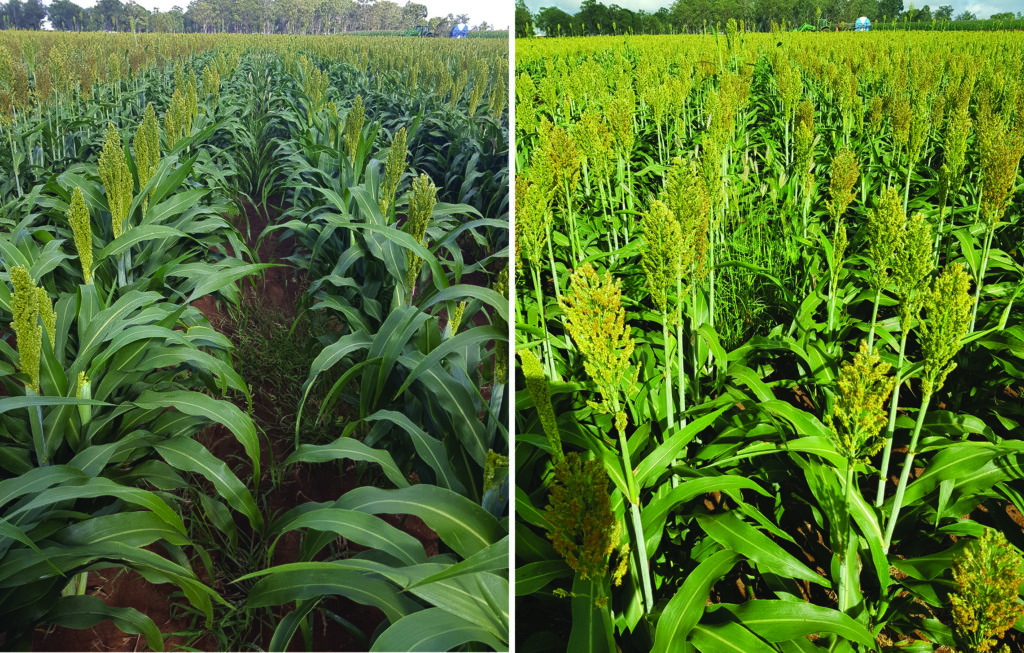 Two of the most difficult to control summer weeds, feathertop Rhodes grass (FTR) and awnless barnyard grass (ABG) can produce 40,000 and 42,000, seeds per plant respectively. Other studies have found these numbers could be even higher, so every effort to reduce seed production is worthwhile.

Both these species have populations confirmed as resistant to glyphosate, and recently a population of FTR was confirmed to be resistant to haloxyfop (Group A). Including a poorly competitive sorghum crop in the crop rotation provides a weak link in any strategy to reduce the weed seedbank for these weeds, and potentially allows a blow-out in herbicide resistant biotypes, making future control in other crops or summer fallows very difficult.

Dr Widderick said sorghum competitiveness across all seasons and both sites was increased with narrow row spacing (50 cm) and a plant density of 10 to 15 plants/m2.

In the 2017/18 season at Hermitage, the researchers demonstrated that planting sorghum at a density of 10 to 15 plants/m2 reduced seed production of both weed species reduced by over 50 per cent compared to the seed production at the low crop density of 5 plants/m2. In the same season, cultivar choice, sorghum density (5, 10, 15 plants/m2) and row spacing (50, 75 and 100 cm) had no statistically significant effect on crop yield.

Armed with this information, the 2018/19 sorghum trial at Hermitage was sown at a crop density of 10 plants/m2, and the effect of row spacing (50 cm and 100 cm) on weed production was measured. Biomass and seed production of ABG was reduced by 55 per cent and 65 per cent, respectively when the sorghum was sown at the narrower spacing. Similarly for FTR, the 50 cm row spacing reduced biomass and seed production by 48 per cent and 56 per cent, respectively.

Crop competition is a ‘free kick’ non-herbicide tactic in the WeedSmart Big 6 strategy to manage herbicide resistance in weeds. There is now solid evidence that growers can maintain crop yield and reduce summer grass seed production by planting sorghum crops at a density of 10 plants/m2 and a row spacing of 50 cm.

There are some residual herbicide options for the control of these summer grass weeds in sorghum. However, their efficacy can differ greatly depending on the season and will rarely provide full control of FTR and BYG. A combination of residual herbicides and a competitive crop is likely to have an additive effect and reduce seed production on surviving weeds.

This research project also demonstrated that mungbeans are more competitive on 50 cm row spacing, making any changes to seeding equipment worthwhile as it would suit the whole summer crop program in the northern region.

Organic grain producers Paul and Cherry Murphy have always relied on crop competition as an integral component of their weed management program in all crops, including sorghum, at ‘Kevricia’, near Capella in Central Queensland. 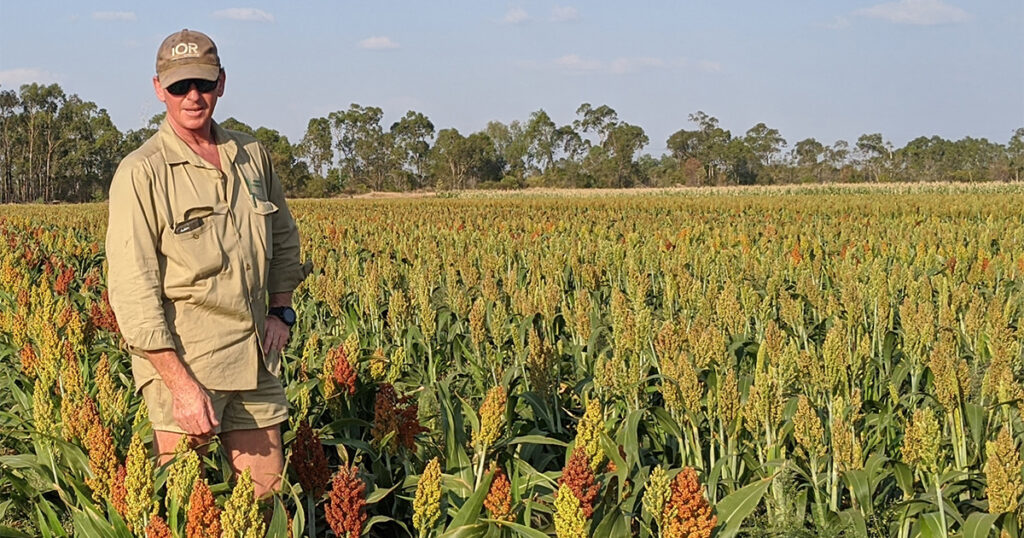 Paul Murphy, Central Queensland, has been sowing sorghum on 50 cm row spacing for many years to suppress weeds in their organic farming system.

“We have been working off a plant density of around six plants per metre square as a rule of thumb that seems to work in most seasons on our farm,” he says. “In seasons where soil moisture might be limiting we have seen higher density crops fall over, and so have leant towards the lower planting rate. But the 10 plants per metre square would certainly increase the competitiveness of the crop in seasons where there is sufficient moisture.”

Paul is pleased to see researchers doing more work on row spacing and plant density, which is difficult to really tease out in commercial settings where there are too many potential variables. “In sorghum there is a complexity associated with plant density, tillering and row spacing that needs scientific trials like this to really determine the optimal combination for maximum yield and weed control in a variety of seasonal scenarios,” he says.

This season Paul will be breaking with tradition and planting sorghum on wider row spacing as he now has a Garford camera-guided inter-row cultivator. He hopes the wider spacing will only be required for this season while he makes the adjustments required to have the machine suit their controlled traffic configuration. 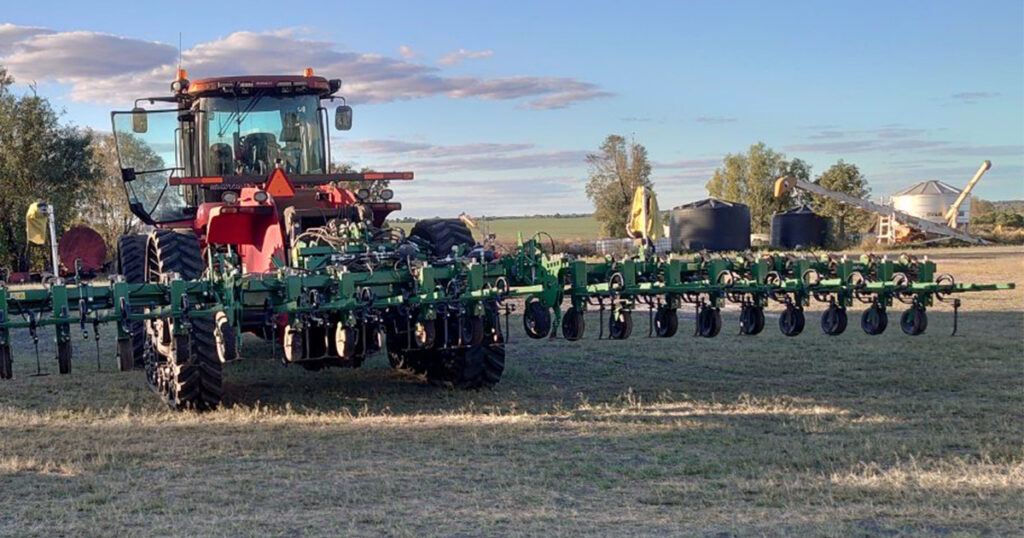 The Murphy’s inter-row cultivator is capable of working in crops planted on 50 cm row spacing once it has been adjusted to suit their CTF configuration.

“Once we are ready to plant the winter crop I hope to be able to plant on 50 cm spacing again and still use the inter-row cultivator,” he says. “The cameras on the cultivator guide the alignment of the tynes to follow the plant row with a 1 cm accuracy, and can be used when the crop is 10 to 40 cm high.”

As organic growers the Murphys don’t use any herbicides and so early weed control can be difficult, but this inter-row cultivator will help remove any weeds that emerge with the crop and then crop competition can suppress any later germinations.