Weed control is a package deal in SA Mid North

Agronomist Craig Davis has been assisting growers in the Mid North and Yorke Peninsula of South Australia to navigate their way around resistance to key herbicides such as trifluralin, Group A and Group B herbicides for 10 years or more.

“Some of this chemistry was cheap and dealing with the loss of these modes of action has been difficult,” says Craig. “The key to farming without these herbicides has centred around using crop rotations to control the weed seed bank.” 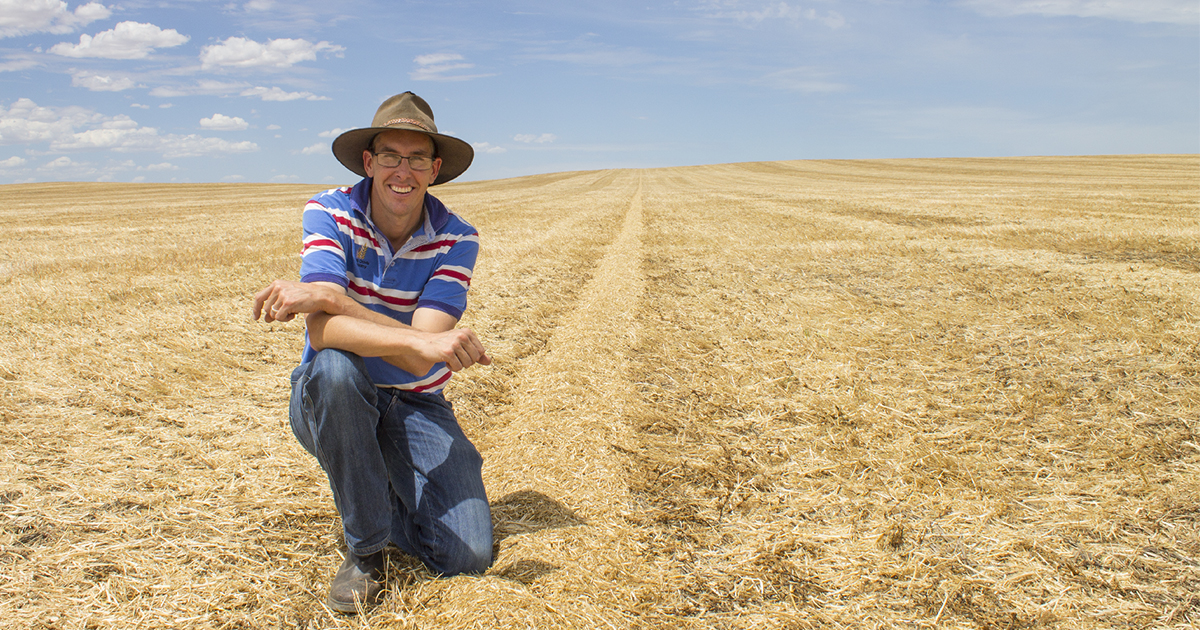 Mid North SA agronomist Craig Davis says harvest weed seed control has been widely accepted as a necessary tool to manage the seed bank in the Mid North and Yorke Peninsula. Narrow windrow burning (NWB) is commonly practiced in the region, and there has been considerable interest in chaff management systems with a few chaff decks operating and some growers now trialling chaff lining.

Annual ryegrass control has been and remains a significant cost to growers in these regions. Brome grass and wild oats are becoming increasingly important weeds that were previously suppressed by trifluralin, and stubble retention on many farms has also favoured some weeds, like brome grass.

Craig says these weeds are demonstrating increasing resistance to Group A (fop and dim) and Group B (SU and imi) herbicides, and some of the alternative pre-emergence herbicides are relatively ineffective, or variable in their control.

For some growers, oaten hay production for export has been a useful enterprise to reign in resistant annual ryegrass numbers. Although a very effective weed control option, it is not for everyone.

Brome grass and wild oats are not as well controlled through oaten hay production because a significant amount of seed is shed before the crop is cut.

For many hard-to-kill weeds, a breakthrough came with the introduction of new imi-tolerant lentil varieties in the early 2000s, which are now built into the rotation on most farms in the region. “Imi-tolerant lentils have been very useful in managing weeds, and the high grain prices and suitability to the rotation have made them the legume of choice for growers,” says Craig. “In practice though, field peas are the most effective legume option for grass weed control.”

Field peas can be sown later without suffering a yield penalty, are a more competitive crop and are a good option for effective crop-topping due to their early maturity. The downside of field peas is the likely build up of snail numbers.

Although lentils have been the pulse of choice for several years, field peas are the most effective legume option for grass weed control in the region because they can be sown later without suffering a yield penalty, are a more competitive than lentils and are a good option for effective crop-topping due to their early maturity.

Break crops currently make up around 50 per cent of the cropped area, due mainly to the recent high price for lentils. Craig expects this area of break crop to drop in response to the lower lentil price, however, growers generally recognise the benefits of maintaining diversity in their cropping program.

“Canola is more competitive than lentils and enables the use of triazine as an alternative chemistry for annual ryegrass control,” he says. “Hybrid canola is particularly competitive against weeds and can suppress seed set even when the herbicide package is not strong.”

A large portion of the canola crop is windrowed and there is a long history of spraying under the cutter bar to reduce seed set in lodged and late germinating ryegrass. Many growers have added narrow windrow burning (NWB) to their weed management program to kill any viable weed seed left at the end of the canola crop.

A cheaper option is to spray over the top to desiccate the crop, then direct harvest with a narrow windrow burning chute and burn the narrow windrows the following autumn, however Craig has witnessed significant wind damage to standing crops and recommends growers continue to swath and spray under the cutterbar, unless they can guarantee timely harvest. The higher harvest height of direct headed canola also means a significant amount of weed seeds are not captured in the header front.

Canola grown on cereal stubble has reached a yield plateau, and along with the increasing incidence of clethodim resistance, Craig expects growers to increase their use of double-breaks in their rotations. The traditional double break in the area was pasture followed by canola, which provides annual grass weed control, a cereal disease break and uses the residual soil nutrients.

“There is now an increase in the use of a double break of oaten hay or grain legume followed by canola,” he says. “This allows the canola to thrive in paddocks with lower weed burdens, lowers stubble residue levels and increases soil nutrient levels, particularly nitrogen.”

“Adding feed barley to the rotation offers growers the opportunity to implement a triple-break to control brome grass, wild oats and ryegrass, making use of the permit that allows spray-topping of feed barley to reduce weed seed set prior to harvest,” he says.

“Stubble retention makes the adoption of narrow rows more difficult but many growers have moved from 30 cm to 22 cm row spacing using tined planters,” says Craig. “More commonly, growers are using higher planting rates to achieve stronger crop competition. The other critical aspect is to seed all crops at the optimal time of sowing and to not plant everything early. Early sowing should only be considered for paddocks with low weed numbers.”

Mixing trifluralin with another pre-emergent herbicide is an effective tool provided both herbicides in the mix have some efficacy, say over 80 per cent efficacy as a stand-alone herbicide. With high levels of trifluralin resistance now widespread, the use of other effective MOAs in combination is increasing. With heavy stubble loads on the soil surface making it difficult to achieve high levels of control using pre-emergent herbicides, Craig says it is essential that growers diversify and implement other weed control tactics to remove any survivors and stop seed set.

Harvest weed seed control has been widely accepted as a necessary tool to manage the seed bank. Narrow windrow burning (NWB) is commonly practiced in the region, mostly in canola and lentil crops because the windrows tend to stay in place and support a hot fire that achieves a high level of weed seed kill.

“There has been considerable interest in chaff management systems in the district and several clients have used chaff carts in the past,” he says. “Now there are a few chaff decks operating and some growers are trialling chaff lining. There has been success with chaff lining pulses one year and placing the narrow windrows of the following canola crop on top of the pulse chaff line.”

“Growers using chaff decks are seeing improvements in summer spraying efficacy as a result of less dust coming off the tramlines,” says Craig. “The downsides are the increased difficulty in establishing crops in the tramlines and, although the weed seed mortality is high, there are still high numbers of weeds germinating on the wheeltracks.”

Getting started with chaff lining

Farming 4000 ha of light sandy to heavy clay soil in the medium rainfall district of Halbury and Salter Springs SA, Kevin Simon trialled chaff lining for the first time in the 2017 harvest.

Kevin planted early maturing PBA Wharton field peas to help bring annual ryegrass numbers back under control. The field peas yielded around 3–4 t/ha and, being early maturing, offered an opportunity to harvest early and catch the ryegrass before it lodged or set seed. 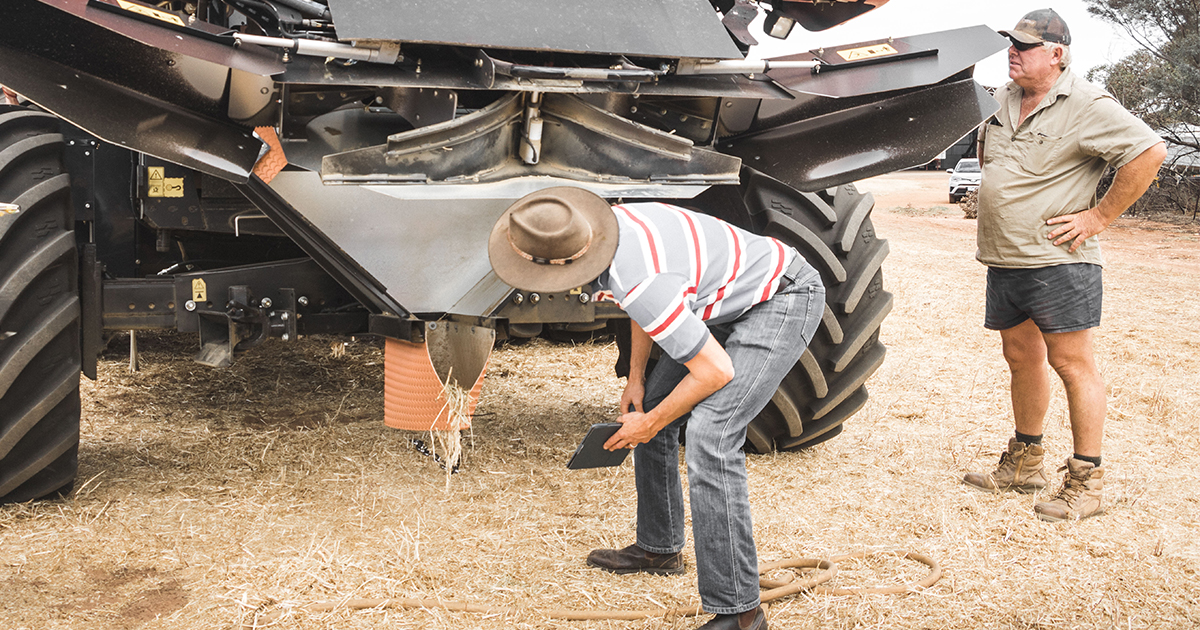 Farming in the medium rainfall district of Halbury and Salter Springs SA, Kevin Simon trialled chaff lining for the first time in the 2017 harvest. He planted early maturing PBA Wharton field peas to help bring annual ryegrass numbers back under control. Kevin plans to plant TT canola into this paddock in 2018 using a disc seeder to minimise disturbance of the chaff line.

“Harvesting low and early are important to stop ryegrass seed set but it also comes with difficulties because the ryegrass is still green and can bind up the rotors in the header,” he says.

“We spray over the top of the canola with a self-propelled sprayer then direct harvest to control ryegrass using the chaff lining chute,” he says. “Chaff lining is also a good way to collect volunteer crop seed from the previous season. The plan is to place the canola narrow windrows on top of the previous year’s pea chaff line, and burn the narrow windrows to control weed seeds collected during the harvest process.”

Last summer was very dry and so there was very limited germination of volunteers and weed seeds from the field pea chaff lines. In wetter years, Kevin expects that volunteers would be the most dominant plant type within the chaff line, with ryegrass being the next most prevalent species present. If necessary, Kevin is prepared to apply a range of chemical and cultural control measures to target the weeds growing in the chaff lines. Lime applied on other paddocks has also helped reduce the ryegrass population.