Read time: 5 minutes
Resources / Articles / Ask an Expert / What alternatives are there for desiccation and crop topping?

What alternatives are there for desiccation and crop topping?

Desiccation and crop topping with pre-harvest herbicide application is a useful way to reduce seed set in late germinating weeds and is an effective harvest aid for cereal grain, pulse and oilseed crops.

Given the scrutiny that glyphosate is currently receiving Paul McIntosh, WeedSmart’s northern extension agronomist, says it may be a good time to start looking for alternative means of reducing weed seed set prior to harvest and avoiding any potential issues with market access. 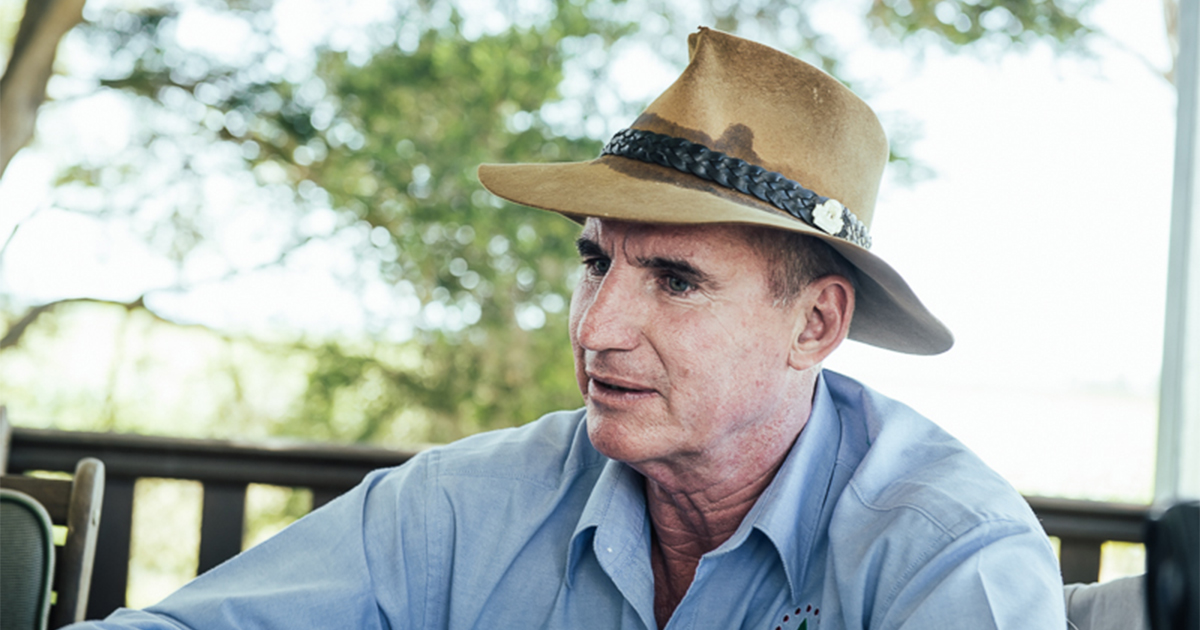 WeedSmart’s northern extension agronomist, Paul McIntosh has been investigating alternatives to glyphosate as a desiccant in mungbeans.

“Currently, there are five herbicides registered for late season use in a variety of crops,” he says. “Glyphosate and diquat (or Reglone) are registered for use in wheat and barley in some states, canola, chickpea, lentil, faba bean, field pea, mungbean and soybean. For some of these crops, growers are also able to use paraquat, metsulfuron methyl or saflufenacil (Sharpen).”

Although there are many benefits to the practice from a weed control perspective, there are also market forces at play that could curtail the future use of pre-harvest herbicides.

“It might be a good time for growers to re-visit some of the non-herbicide options for reducing seed set,” says Paul. “One possibility is to trial swathing in pulse crops like chickpeas, faba beans and mungbeans. Early commercial scale trials suggest that it could be very effective and could also have the additional benefit of hastening crop maturity, bringing harvest forward.”

“In combination with harvest weed seed control, swathing is a valuable WeedSmart Big 6 tactic to manage the weed seed bank,” he says. “Swathing adds another non-herbicide tool to a diverse program, particularly for pulse crops that are often not very competitive, and for weeds that typically shed seed before the crop is ready to direct harvest.”

Are there other herbicide options for crop desiccation if the current products are banned?

In brief: Not really. In most instances, glyphosate is the most effective crop desiccant product.

The details: Glyphosate is already a key component of cropping systems, particularly in no-till systems. In crops like mungbeans that have semi-indeterminant maturity traits that make them want to keep on growing, glyphosate applied at the label rate can give mixed results.

The Australian Mungbean Association recently commissioned weeds researcher Dr Bhagirath Chauhan, QAFFI to investigate the efficacy of a range of possible alternatives to glyphosate as a desiccant, but there were no stand-out herbicide candidates. This small plot trial also included the non-herbicide option of swathing, and the results were very promising.

In brief: Yes. A grower on the Darling Downs trialed swathing two mungbean crops in March and April 2020, the first being 0.4 ha within a larger paddock that was desiccated with herbicide, and the second was an 8 ha block.

The details: These two trial paddocks were very successful and the grower was encouraged by the yield and grain quality of the swathed areas. This has generated significant interest from other growers and agronomists in the northern grains region.

The crops were swathed at the standard 90 per cent physiological maturity, the same timing used for chemical desiccation in mungbeans. Harvest was delayed in the 0.4 ha block due to two falls of rain, 12 mm and then 18 mm, which meant the windrows remained in the paddock for 14 days. The crop produced 1.6 t/ha of reasonable quality grain with no evidence of dust. 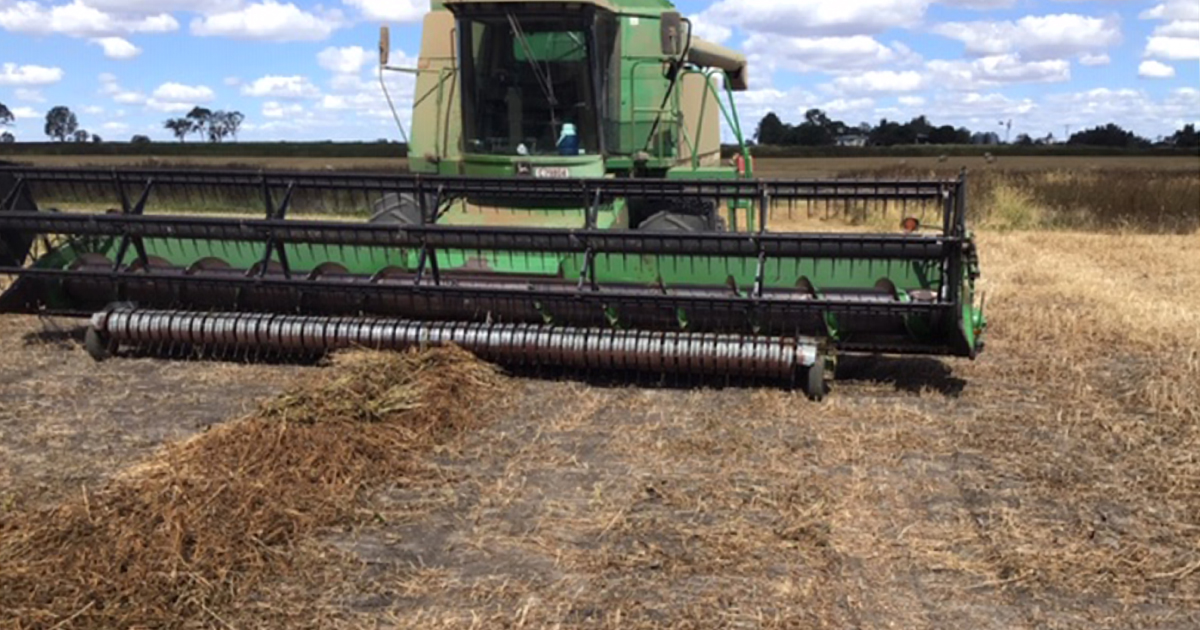 Picking up the mungbean windrow after a two week delay due to wet weather.

The crop in the 8 ha block was shorter and sparser than the small trial block. Four days after this block was windrowed it was harvested with a Smale pea front at the correct moisture, suggesting that low yielding crops with reduced dry matter could be harvested earlier. The crop yielded just below 1 t/ha of excellent quality grain, with very few pods being left on the ground.

What are the potential benefits and costs of swathing?

The details: The first benefit is the avoidance of pre-harvest chemical application, removing the potential for desiccant chemical residues in the grain. The second big benefit is that it may be possible to bring harvest forward. Even if swathing is done when the crop is 90 per cent physiologically mature, the same as for chemical desiccation, the crop can be harvested within a few days and could be off the paddock nearly two weeks earlier than a desiccated crop. The clincher is the possibility of swathing before the crop reaches 90 per cent maturity. If this can be done without compromising grain size and quality, it could have very significant benefits for weed control. Many weeds in the northern cropping region set seed before traditional desiccation and harvest time and so if the crop can be cut earlier there is a chance that less weed seed will mature. 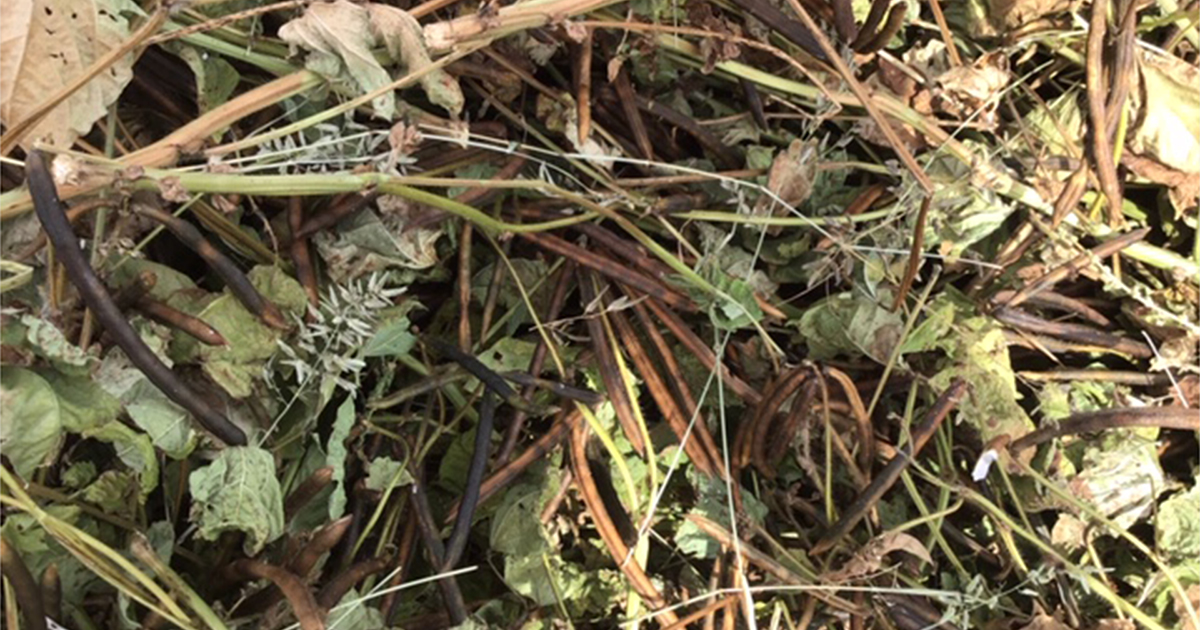 It is early days for the revival of swathing in the northern cropping region and there are many things to be tried and tested. Early successes have also been seen in sorghum, faba beans and chickpeas.