Read time: 3 minutes
Resources / Articles / Ask an Expert / What are the herbicide options for the summer fallow?

What are the herbicide options for the summer fallow?

The weakest link in weed control programs in most northern region farming systems is the summer fallow. With no competition from crops, uncontrolled weeds can use the abundant water and nutrients to produce lots of seed, putting additional pressure on future weed control program.

For the last three decades glyphosate, and its tank mix partners, has provided effective summer weed control and allowed the implementation of conservation farming techniques, but with glyphosate resistance affecting more and more paddocks, summer fallow management needs to change.

Mark Congreve, senior consultant with ICAN, says that growers are implementing new strategies, not simply to replace glyphosate but to extend its use in their farming system. “Glyphosate has been, and continues to be, the most useful knockdown herbicide available to growers in the summer fallow,” he says. “While still effective in many situations, resistance to this herbicide is becoming increasingly evident and other options need to be built into the summer fallow program.”

“There are two main signs that growers need to look for to detect if their weed populations are becoming more resistant to herbicides,” he says. “The first is to take note of ‘survivor’ weeds – individual weeds that appear unaffected after a spray event that has killed the surrounding weed plants. The second sign is ‘rate creep’. This is where a herbicide is still effective but only when higher and higher rates are applied.”

Growers should not ignore either of these signs, which could indicate changes in the herbicide resistance status of the weed population. Mr Congreve suggests growers should seek agronomic advice and test weeds for their susceptibility to a range of herbicides.

“While waiting for the test results, immediately look for alternative fallow management strategies to those that may have worked in the past but are increasingly less effective,” he says. 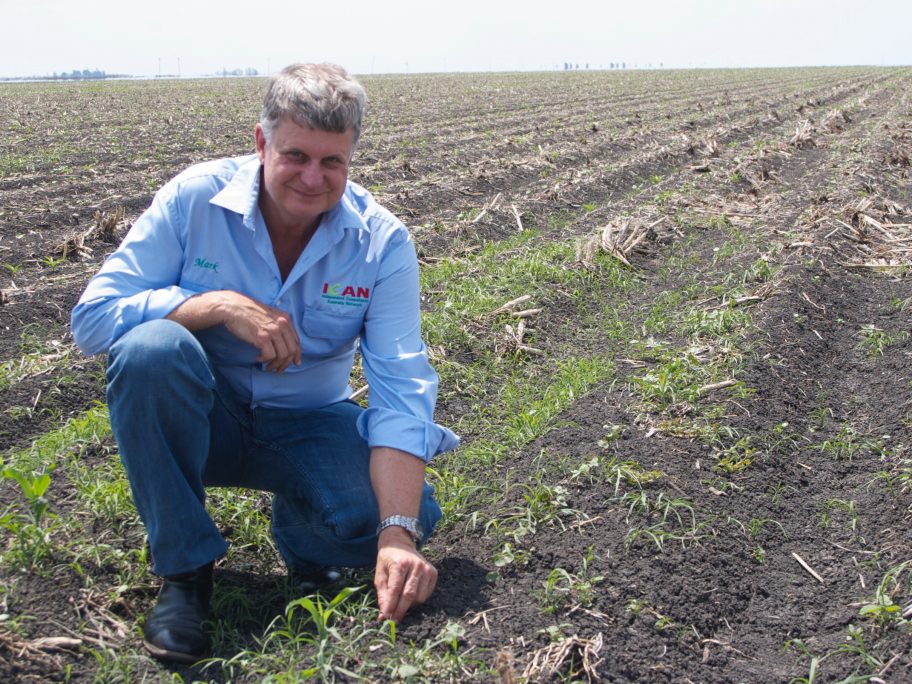 Mark Congreve, ICAN senior consultant urges growers to take note of the early signs of glyphosate resistance and to make changes to their fallow management program.

What should I do as a first step, even if there are no definite signs of glyphosate resistance?

Short answer: Do something different. Double-knock, whenever possible. Implement the 2 + 2 + 0 strategy.

Longer answer: Herbicide resistance is considered an inevitable part of long-term herbicide use but if weed numbers are kept low and all survivors are removed then resistant weeds can generally be managed. The 2 + 2 + 0 strategy adopted in the cotton industry to support Round-up Ready* technology involves using two non-glyphosate tactics in the crop, two non-glyphosate tactics in the fallow and ensuring there are zero survivors.

Wherever possible use the double-knock combination of two herbicides or a herbicide followed with a non-herbicide tactic (e.g. cultivation), particularly while glyphosate resistance levels are still relatively low.

Are there any other knock-down options for grass weed control in the fallow?

Longer answer: Shogun (propaquizafop) is a Group A ‘fop’ herbicide. Fops are particularly effective on small grass weeds, however, resistance is likely to develop faster than has occurred with glyphosate. When using Group A herbicides in the fallow it is essential to double-knock to remove any survivors and enable longer term use this herbicide option. This strategy is useful for controlling glyphosate-resistant weeds such as barnyard grass, liverseed grass and feathertop Rhodes grass. It provides an alternative mode of action to glyphosate and can increase the diversity of chemical control options used across the farming system.

What knockdown options exist for glyphosate resistant broadleaf weeds such as fleabane or sowthistle?

Short answer: There are a number of Group G and I herbicides registered for these problem weeds. Check product labels for details and timing.

Longer answer: Group I herbicides containing either 2,4-D, fluroxypyr (Starane*), clopyralid (Lontrel*), or picloram (Tordon*) can be effective on one or both of these weeds. If weeds are larger, a double knock will be required for high level control. Clopyralid and picloram based products also give residual control of fleabane.

Group G herbicides containing flumioxazin (Valor*) or saflufenacil (Sharpen*) are also effective on one or both species. As they are contact herbicides they perform better when applied to very small weeds, ideally when used in a tank mix with either glyphosate or paraquat.

Feathertop Rhodes grass is a major weed in chemical fallows in Australia, and is notoriously hard to kill with glyphosate. Read More...