Read time: 3 minutes
Resources / Articles / Ask an Expert / What are the year-round options for sowthistle control?

What are the year-round options for sowthistle control?

A GRDC-funded survey conducted across the GRDC Northern Grains Region in 2014–2016 discovered that glyphosate resistant sowthistle was more widespread than previously thought. Originally identified on the Liverpool Plains of NSW in 2013–14, resistant populations have now been identified throughout the region, from central Queensland to central NSW.

Department of Agriculture and Fisheries (DAF) research scientist, Dr Annie van der Meulen says the survey showed that while there is a definite ‘hot spot’ on the Liverpool Plains, glyphosate resistance in sowthistle is a widespread problem for growers.

“Currently, it seems that many resistant populations are exhibiting relatively low level resistance,” she says. “This means glyphosate is still effective in many situations however attention to detail will make a difference to application efficacy.”

If a lower rate is applied to larger weeds they can take a long time to die (if at all) and may well set seed before the plant dies, making the application a waste of money.

“One of the difficulties with managing sowthistle is the fact that it can germinate at any time of the year if soil moisture is available. In favourable conditions, this weed can set seed within months and has the capacity to produce about 6000 seeds per plant,” she says.

To stay in control of sowthistle growers need to be ready to respond to new flushes at any time that surface soil moisture is available. One weakness that growers can exploit is that sowthistle is a poor competitor, so choosing crops that rapidly achieve canopy closure can be a very effective control measure.

To gain a deeper understanding of the extent of herbicide resistance, GRDC has funded further surveillance work in the northern grains region. As part of this work DAF is asking grain growers in Queensland to give permission for weed samples to be collected from their property. Contact Adam Jalaludin at DAF on 13 25 23. A similar survey, managed by John Broster at Charles Sturt University, will be conducted in NSW. 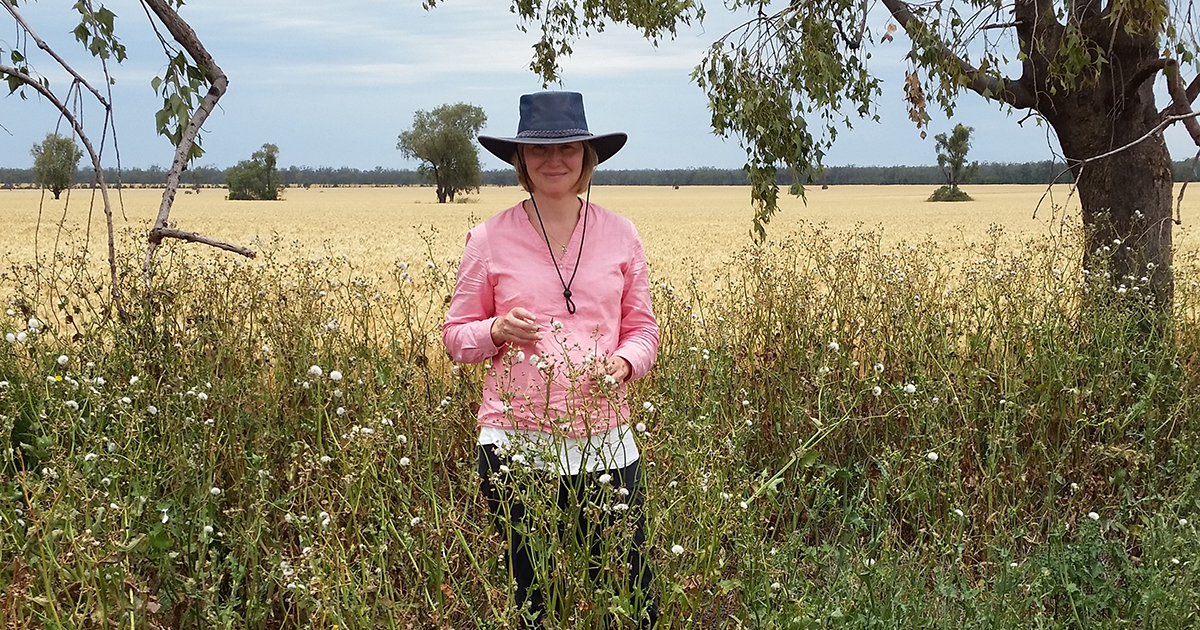 What are the control options for sowthistle in the fallow?

Longer answer: Use optical sprayer technology and the maximum label rate. Double-knocking treats survivors and provides control for cohorts that germinated after the first spray. In the double knock operation, partner glyphosate with a product that has a different mode of action and ensure the second treatment occurs within 21 days of the first. Pre-emergent herbicides also have a role to play, but follow the label instructions carefully to avoid any unwanted impacts on the subsequent crop. Stubble cover may be a double edged sword as it helps retain moisture that the sowthistle can access. Be aware of the antagonism between glyphosate and 2-4D that reduces the efficacy of glyphosate on sowthistle. Burying seed to a depth of 2 cm or more can help to reduce emergence however repeated use of cultivation can bring seed back to the soil surface where germination can occur.

Common sowthistle thrives in situations where there is no competition.

Are there any control options in-crop?

Longer answer: Crops that form a dense canopy, and close over quickly, will help suppress most weeds. Winter cereals, such as barley and narrow-sown wheat, can provide very effective control of sowthistle. Be aware that sowthistle will exploit any gaps in the crop. It is usually best to avoid planting chickpea in a paddock that has an existing sowthistle problem. Herbicide resistant crops can also assist with in-crop herbicide applications.

What can I do at harvest to control sowthistle?

Short answer: Plants cut by the harvester can re-shoot, so control established plants as soon as possible following harvest, and be ready to spray new flushes when the plants are small.

Longer answer: Researchers are investigating whether sowthistle is a good candidate for harvest weed seed control. Although not generally considered a summer weed, sowthistle plants can germinate at any time of year if soil moisture is available, in multiple flushes throughout the growing season. Moreover, plants that are cut off during harvest can reshoot and take advantage of the ample resources available once the crop is removed. Plants left uncontrolled at any time of the year can set seed, presenting a problem in subsequent crops.