There has been a gap in the pre-emergent herbicide options for growers to control broadleaf weeds, particularly in pulses, but also in cereals.

Dr Chris Preston, Professor, Weed Management at The University of Adelaide says a suite of new Group G herbicides will go a long way to help growers control brassica and thistle weeds and rotate away from the imi chemistry that has been heavily used in recent years. 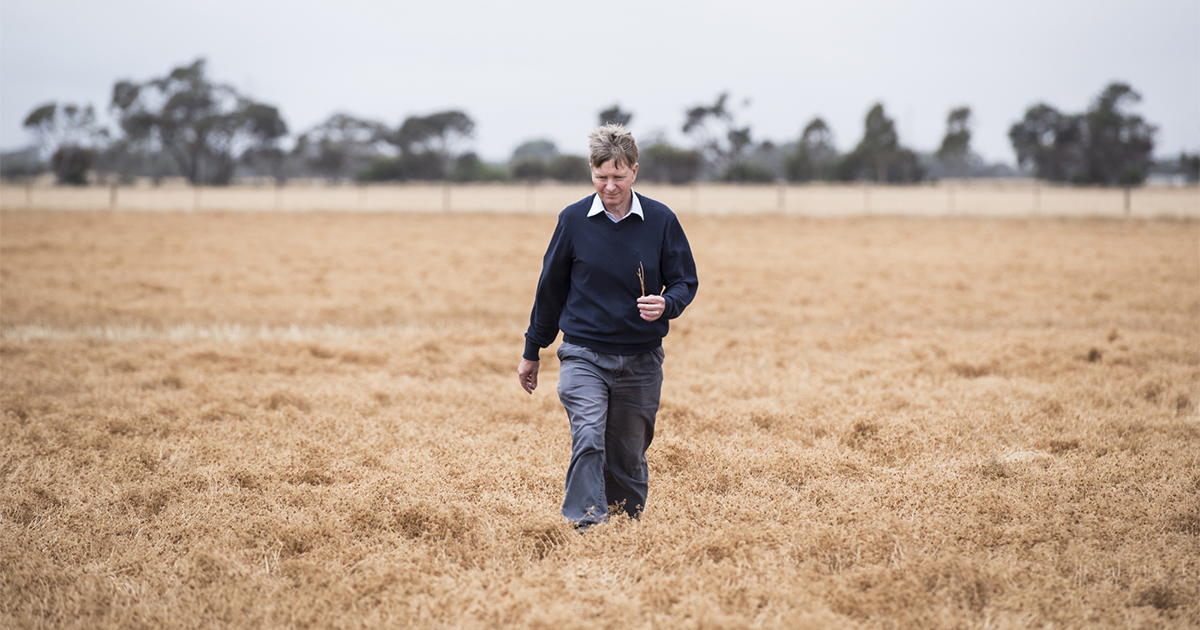 “The new Group G herbicides will be of particular value in pulse crops,” he says. “Until recently Group G products have only been used in small quantities, predominantly as a knockdown spike ahead of planting, but several of the new products have pre-emergent herbicide use patterns.”

Group G mode of action inhibits part of the process for making chlorophyll, and the leaves die as a result. Uptake of the herbicide is usually through the leaf surfaces – either through contact on emerged weeds or taken up from the soil as the weed seedlings break through the soil surface.

“The introduction of Terrain (flumioxazin) as a pre-emergent broadleaf herbicide in front of faba beans offered a new and helpful use pattern in the pulse phase,” Chris says. “Terrain is also a good fenceline weed control option on heavier soils, provided all surface vegetation is removed prior to application.”

Syngenta’s yet-to-be-released Group G product, Reflex (fomesafen) is expected to offer pulse growers pre-emergent control of broadleaf weeds that might be resistant to other MOA groups. This product can be used either pre-emergent incorporated by sowing (IBS) or post sowing, pre-emergent (PSPE), and will provide an alternative to imi herbicides for the control of weeds like sowthistle and prickly lettuce in pulse crops. Lentils are less tolerant than other pulse crops, so Reflex can only be used IBS in lentils.

With the release of these new products Chris is reminding growers and agronomists of the importance of ensuring that herbicide product choice is always based on addressing the weeds present that are likely to cause economic loss or produce large quantities of seed.

“Mixing and rotating herbicide modes of action is one of the WeedSmart Big 6 tactics, but crop competition is just as important,” he says. “Pulses are particularly sensitive to competition from weeds in the early crop stages, so using these Group G herbicides in a tactical way to control early germinating broadleaf weeds could be a very good way to keep pulses profitable in our southern farming systems.”

The sustainable use of Group G and other new herbicides coming to market will be a key topic at WeedSmart Week 2020 in Clare, SA. The companies developing these new Group G products will be present to answer questions and provide advice. Click here to register for WeedSmart Week 2020.

Should I mix and rotate these new herbicides with existing products?

In brief: Yes. Read the labels as they become available and look for opportunities to mix and rotate within and between seasons and crops.

With some clever planning these products can help ‘bring back’ some previously lost chemistry using the mix and rotate tactic, extending the effective life of a broader range of herbicide options. When coupled with some non-herbicide tactics the grower can regain control of herbicide resistance on their farm and operate in a low-weed situation.

What new use patterns are available with the new Group G herbicides?

In brief: Pre-emergent with IBS and knockdown options.

The details: The first Group G with pre-emergent properties to hit the Australian market was Terrain (flumioxazin), from Nufarm with new use patterns registered for wheat and pulses. Other products with pre-emergent properties expected to come to market in the next year or two are Syngenta’s Reflex (fomesafen) and BASF’s Voraxor (saflufenacil + trifludomoxazin). Voraxor can be used pre-emergent in cereals and also as a knockdown spike. Terrador (tiafenacil) from Nufarm will have knockdown spike use and is safe for cereal or pulse planting just one hour after application.

More details about the new products can be found in the Group G Tech Note.

The early trials with Reflex look very promising and widespread use of this herbicide is expected in WA, where farmers have battled wild radish control in lupins for decades.

Is resistance to Group G a problem?

In brief: Not yet in Australia.

The details: There are no recorded cases of weeds resistant to Group G herbicides in Australia. Although the Group G mode of action has been commonly used for over 15 years, these products have generally been used in small quantities.

Resistance to Group G is becoming widespread in North America and we will soon have resistance problems if we do not practice the Big 6 tactics to minimise weed seed production.