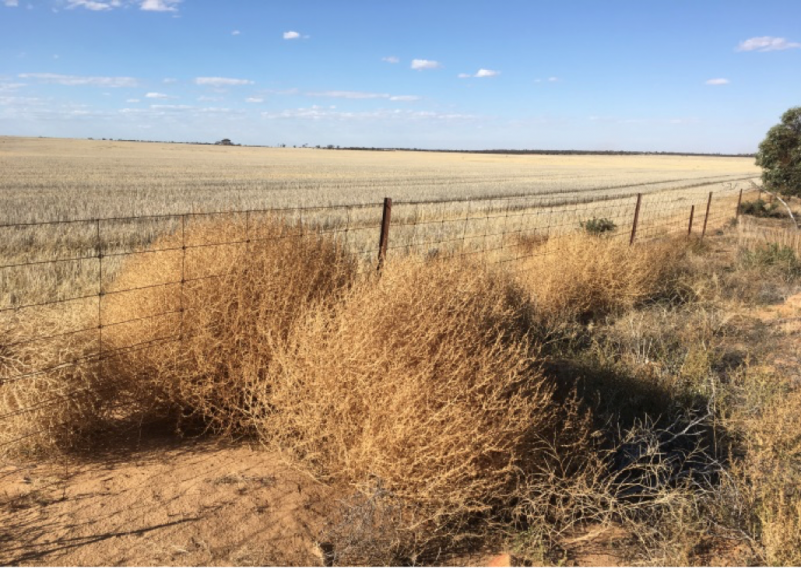 Roly poly, also known as prickly saltwort or tumbleweed (Salsola australis R.Br.), is a native species found throughout Australia with the exception of Tasmania.

The dead plants can break off at ground level, forming the iconic ‘tumbleweeds’ seen in movies. Roly poly, along with a range of other species in the Salsola genus, is a prominent weed of agricultural systems internationally.

Like most summer weed species, roly poly utilises soil moisture and nutrients that would otherwise be available to the following crop. The time taken to clear uncontrolled plants may delay seeding. Livestock will graze the young plants.

However, they will not eat the mature plants and are injured by the prickly leaves. This species has tentatively been linked to oxalate poisoning, but most tests indicate that oxalate levels are insufficient to poison sheep. Levels of oxalates and nitrates in roly poly may increase in the presence of nitrogen fertiliser or legume species.

The dead, mobile tumbleweeds can become a significant fire hazard, particularly when too many plants pile up against fences or buildings.

Note that as a native species, this species is not a problem in areas of native vegetation, and plays a valuable role in revegetation of disturbed sites.